I thought I'd write a post one last time!

My life has changed a lot in the last month and I guess things changed for everyone at the GTH mission. You just learn to except change and go with the flow and learn how to quickly settle into a new normal. There have been quite a few staff changes and me being one of them!

I have moved on to a new phase in life, courtship.

I left my Aleg home of almost 2 years and moved to Port-au-Prince.  It was hard to leave as I felt like I was leaving my family, all my friends and the work that I loved. But I was also excited about about what God had in store for me. I'm so thankful for the time I was able to serve at GTH clinic. Thinking back over my time spent there, I just have this flood of memories that come to my mind.  So many sad and painful experiences but also many fun and joyful experiences.  I will never trade my time spent at GTH for anything. God has taught me so much and showed himself so faithful.

To the staff at the mission and Clinic... keep fighting the good fight and serving the Lord by serving the  dear people you are working with. I love you all and will keep you all in my prayers 🙏.

Please keep praying for the Mission and all the staff. Pray for wisdom and loving gentle hearts. Some days are very stressful and the decisions that need to be made are not always easy.
- Marcile

Hey Cody here again, figured we should do another update, especially with the earthquake and all that excitement. We did feel the earthquake up here at Aleg at 8:30, but it was not bad enough to do any damage. Reports started coming in about damage in Cayes, so we discussed options and came up with a plan over brunch. We loaded up medical supplies and some of us went prepared to stay all week if needed. We left for Petite Guave at 11:00. We met with the other missions and headed to Cayes with three land cruisers at 1:30. As we neared Cayes we came upon landslides, cracked roads, and damaged buildings. We found a badly damaged motel and went to see if we could help, but we could not hear anybody trapped. Someone came and told us that there was another motel down and there were people calling for help. We went and dug where they were saying Someone was calling, but could not dig very deep. We dug around for several hours but could not find anybody. We went back to Petite Guave to stay for the night. Sunday we went back to Cayes to help in the hospitals if needed, but their patients were taken care of. Andy Faller was in contact with the mayor of Pestel, and was told that there was medical help needed on his island of Grande Cayemite. Austin, Emma, Emily and I went with Andy and some from his mission on a 1 1/2 hour boat ride to the island. When we got there people swarmed us with the hurt people. We set up our medical bag and did what we could, until someone opened up the clinic that was there. There was no staff there so we set up and organized in there. We bandaged about 10 people and found several badly hurt people that needed to be transported to a hospital. We left them and told them we would be back the next day to help more. Kendal Nolt was at home for as few days after helping out down here for several weeks, but came back with three others from Plain Compassion Crisis Response. They flew in on Sunday to help with disaster relief. We went back to Petite Guave to regroup and plan for Monday. We went out again with PCCR and a lot more medical supplies. We took three boats out so we could bring people back in case we could not get a helicopter. The tropical storm Grace was on its way and was going to hit Hait around 2:00 and we wanted to be back to mainland before that hit. We bandaged about 50 people and secured 2 others on backboards for transport. We took a 6yr old with a broken femur and possibly a broken hip, an older lady with a broken hip, and a little boy with head injuries. We took them on a rough boat ride back to mainland and then took them to the Fond-de-Blances hospital 3 hrs away. It really started to rain just as we got there and rained all night. We got back to Petite Guave late that night. Tuesday morning the 3 others from Aleg went back to the mission, and I went with Jessi Myers to help with supply distribution in Cayes. We took supplies to several hospitals and helped out peope with downed houses. Wendsday we prepared for a medical run to Pestel and Corail on Thursday. Verlyn Danni and Gloria came down for the night to go along on Thursday. We got to the boat dock at 7:30 and headed to Pestel in two boats. In Pestel they did not need much help so we went to Corail. We found a hospital that had people that needed transported. We got the helicopters to come and fly them out. We secured the patients to backboards and the US army flew out one patient then the USCG flew out 4 others. All in all it was well worth the time we spent to help people get to hospitals. We finally made it back to the mission Friday around noon. A work team came here on Tuesday to replace a school roof. We will update on that later. Thanks for reading and praying and God bless.

Editor's note:  This was written two weeks ago, but was delayed in getting posted. 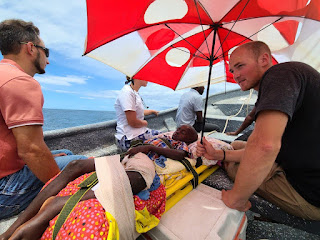 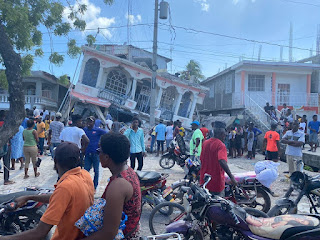 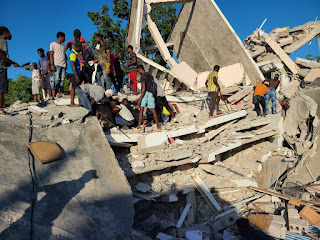 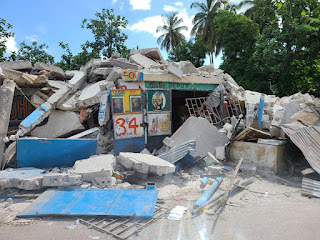 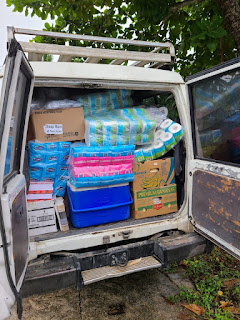 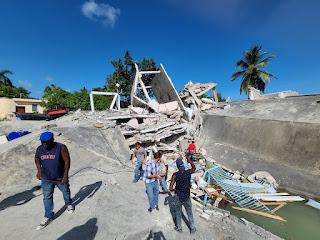 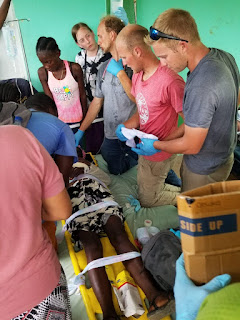 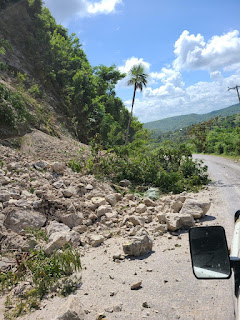 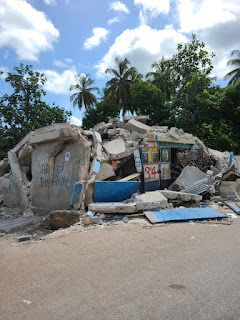 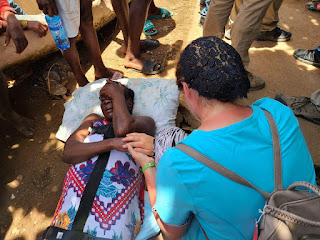 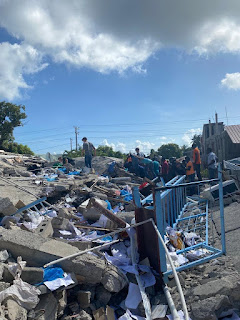 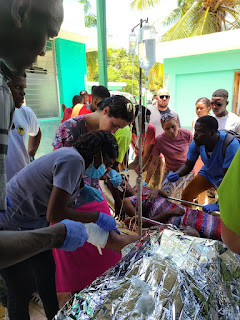 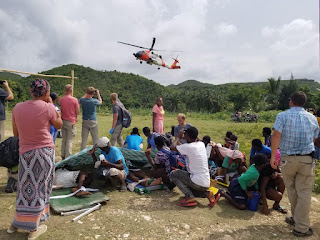 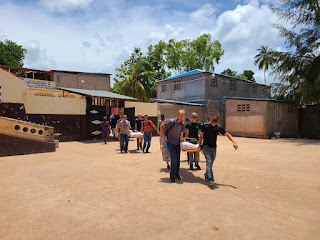 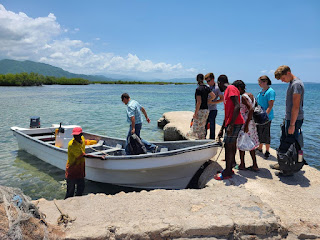