*Oops!  I checked the calendar as I got ready this morning to confirm that it was indeed me on call after clinic today, but I didn't notice until just tonight that my name was also on for blogging!
You know the word blog (spelled blag) in Creole, means joke?.  So when I say I'm going to do a blog, I always think of making a joke. :). But sometimes trying to blog on time IS a joke!  I don't think I would have had time today even if I had known earlier that I was s'posed to!
But now here I am, tucked comfortably in bed, soaking up the peaceful sound of a silent night... That is, silent except for the combined musical chants of innumerable  slimy green frogs, even more nocturnal crickets, and an occasional bark from a neighbor's dog or a small distant rock slide on a nearby mountainside...*
...and then I fell asleep on the job.  That's as far as my inspiration took me last night before those soothing night sounds lulled me right to sleep!
So back to yesterday.
We arrived at clinic to find a steadily growing crowd until, by the time Fre Nores prayed and we got started, all the benches outside were filled to overflowing!
As I was just finishing up one consultation for a baby with a strange skin infection, a very worried mother came rushing into my room cradling her 8 day old baby girl who was obviously having difficulty breathing.
Mali quickly took the baby and seated the mother, who was still very distraught, almost to the point of panic, and then started examining the baby.
She discovered that her tiny little nose was clogged with what looked like a rock hard chunk of meconium, and when the baby tried breathing through her mouth, she'd suck her tongue to the roof of her mouth, hence her breathing problem.
Almost immediately after removing the chunk (which I could hardly stand to watch Mali do, cause pulling stuff out of noses just...gets to me:-0), the baby calmed down and her oxygen stats climbed right back up to normal
But apparently that wasn't the baby's only problem, as you can see in this picture, she had a strange condition in her mouth too that we're treating and following... 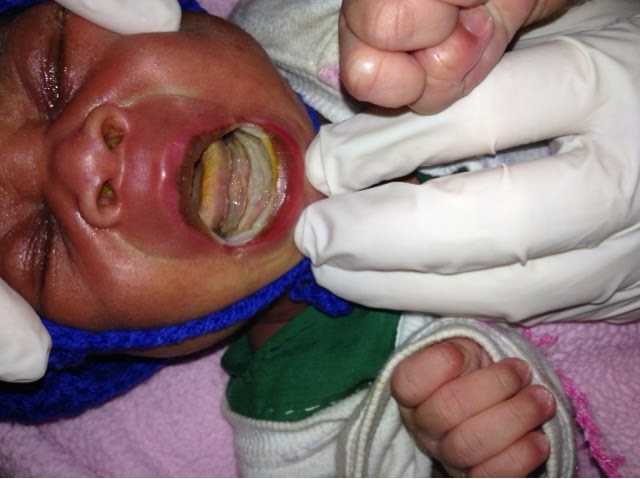 Poor baby was not ok with us opening her mouth.
The rest of the day went well, and we all came home to eat around 2:30.  I spent the afternoon cleaning out the cholera shack again, doing some clinic organizing, and taking care of the handful of after hour patients that came.
After supper, just as we finished Bible study, we got the knock on the gate we'd been waiting for, cause someone had called Mali earlier and told her a lady in labor was on her way.  It's nice having a heads up like that!
Hans, Alyssa, and I started hurrying down, and then running, when we heard very serious "woi-ing" labor cries coming from the clinic!
And sure enough.  That baby was born no later than 15 minutes after we got there, a healthy little boy that lost no time looking for something to eat!  :)
I was so grateful he came so fast, cause I    had been so tired, and really didn't feel up to the thought of maybe being up a good deal of the night!  But God knew that. :) 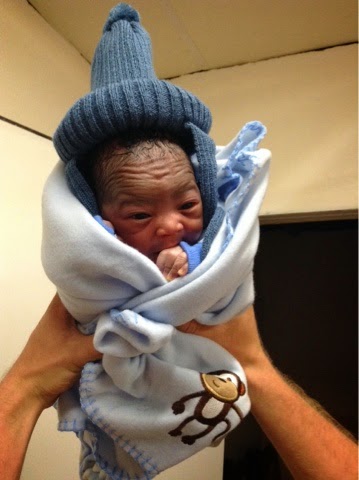 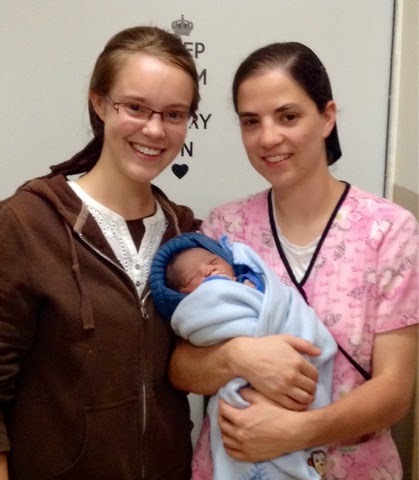 We're excited about our newest Alègue addition, Alyssa, who's an RN from Canada that's committed to two years here!    This was the first birth we did together! :)
Another day has slipped away, and here I am again in bed where admittedly I should be sleeping, but instead I'm listening to the beautiful tropical night sounds again, determined to get this finished and posted before tomorrow...  :)
Hope you all have a restful night!
-whit
By Whit - May 07, 2015 1 comment: