The other morning I woke up and ran to the door. "What?" I yelled.
Nobody was there. It was just a bad dream.
Well, this morning, someone WAS there, when I ran to answer the call.
"Are you up yet?" Steve wondered.
"Yes," I said, trying to make it sound like I had been up a long time, but tricking no one.
"There is a pregnant lady at the clinic," he informed us.
By the time we saw her, she was not pregnant anymore. In fact, they told us that the small baby had been born sometime after midnight. I was wishing it was a bad dream. But it was for real. A little midget of an angel was lying there, to remind us of heaven before we started the week.
By the time we felt comfortable to leave her, it was time for a bit of coffee and then a U-turn to the clinic again. We were planning to put an IV in the lady who had come first thing this morning, but... A lady came in screaming and holding out a blood-dripping thumb. So, everyone stood back a little as we helped her into a bed, and got out the sterile scissors. A few stitches and steri-strips later, we thought it looked a bit more like a thumb again. 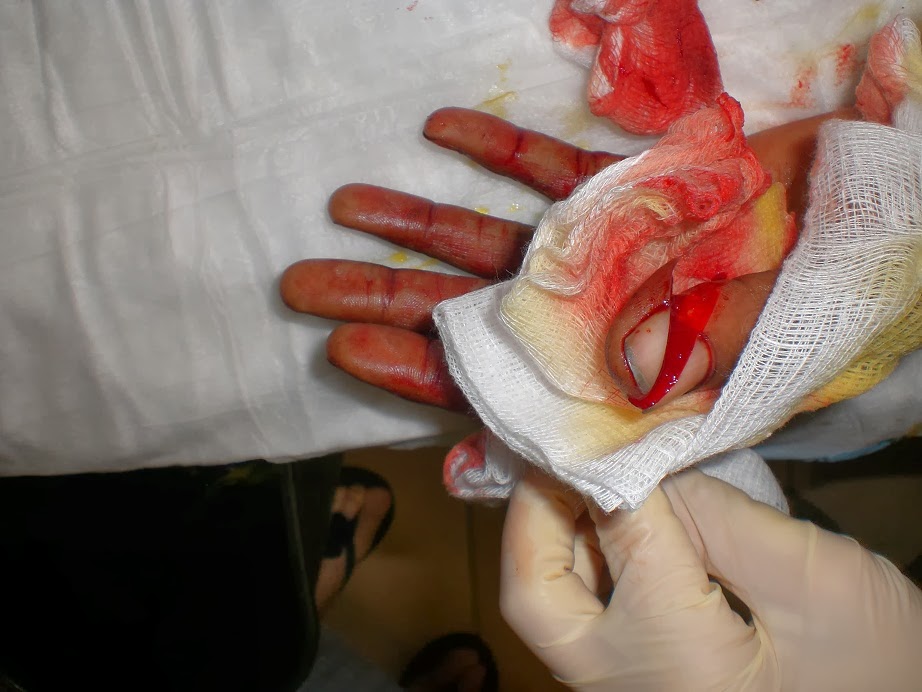 Then, before we even got her bandaged, another little boy arrived. He was breathing hard, bleeding into his cornea, and not able to urinate. So, the attention shifted to him. His oxygen stats were unstable, so we put him on oxygen, and made plans to send him out to the hospital after Mis Leda administered a catheter. 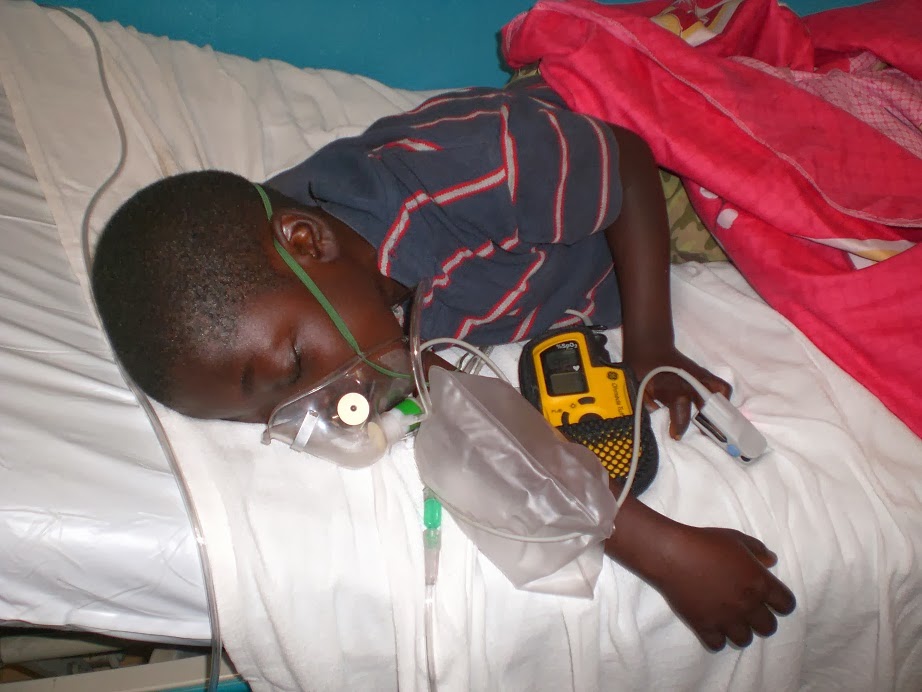 Meanwhile, another patient showed up. We are highly suspicious that he has tuberculosis, and so we also sent him out today, to a special faculty where they help tuberculosis patients.
So, back to the IV and the lady with the miscarriage. She joined the machine and went out to TiGoave for further care. I wanted to cry with her, when I saw tears streaming down her cheeks. What a hard day. "My children at home, they don't have anything," she whispered in my ear.      Here is a little girl we have been seeing every day this week. She had an abscess on her chest, and a draining wound above her eyes. It is so exciting to see her improving. 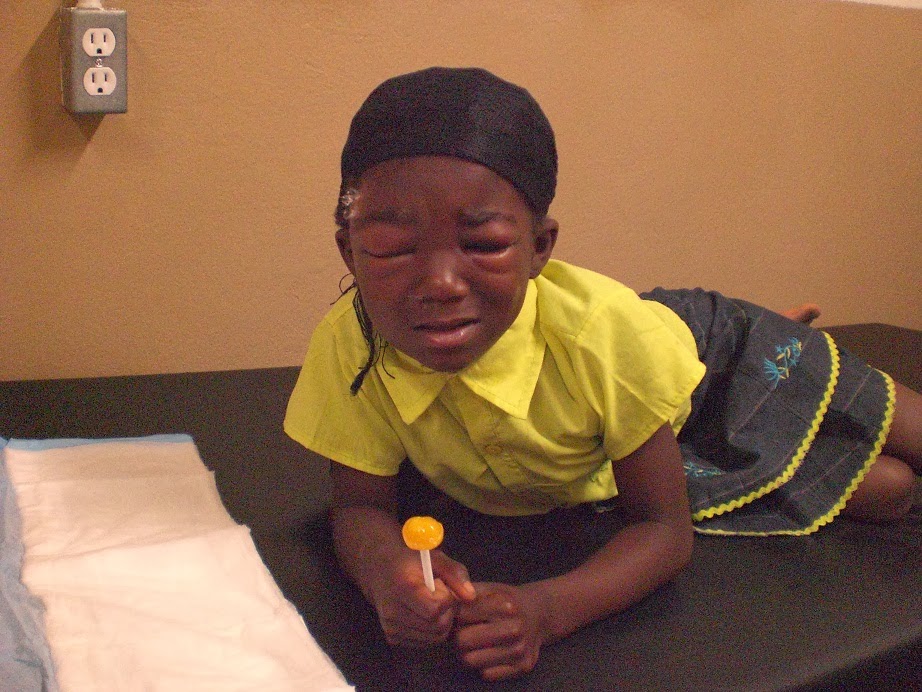 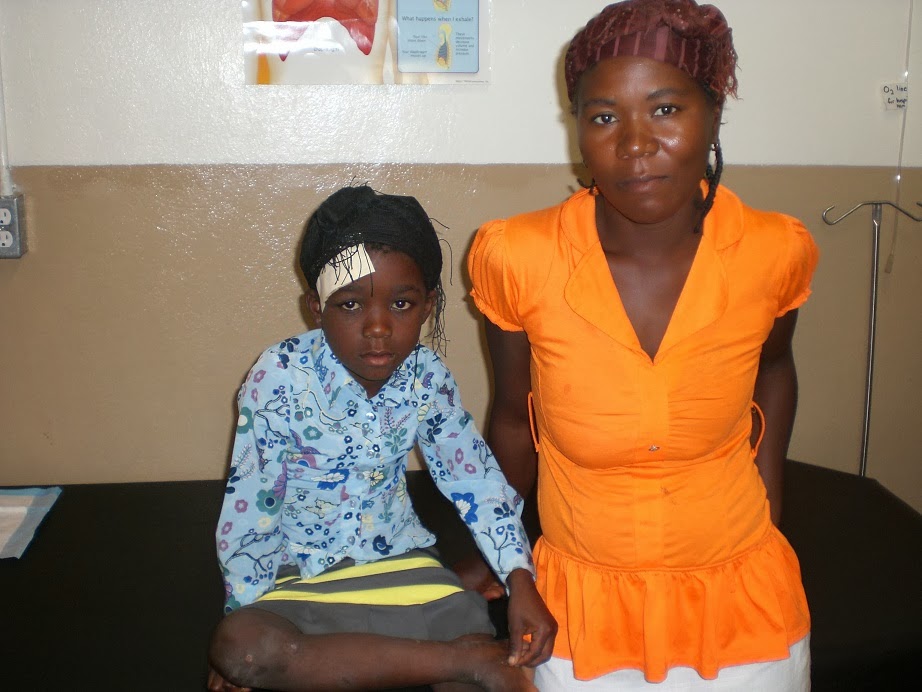 Now, as the day fades away, we are waiting to hear from Steve and Whitney, who have not yet returned from TiGoave, where they took our transfer cases.
The day doesn't want to stop. I try to write this little epistle and end up going down to clinic to help a few more people with skin conditions, or little problems. I know it is Monday! And that God is still in control! Thank-you for all your prayers! Mis Woda
By Mis Rhoda - January 27, 2014 No comments: