From the vantage point of the clinic roof, this is what could be seen yesterday mid morning. A stretcher was carried in with a pregnant lady who was seizing.

As we gathered more information, we learned that she was a 17 or 18 year old young lady who was around 8 months pregnant. She quite obviously had eclampsia.  She had been seizing since early that morning. 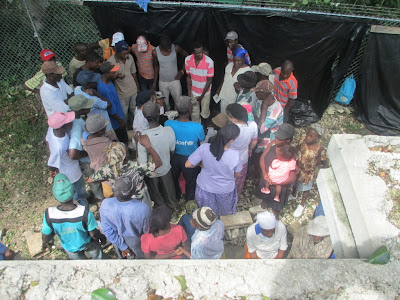 We quickly took blood pressure, checked oxygen saturation, and started monitoring her.  It wasn't long until she was having another seizure.  We shortly had them move the stretcher so we could get her on oxygen. 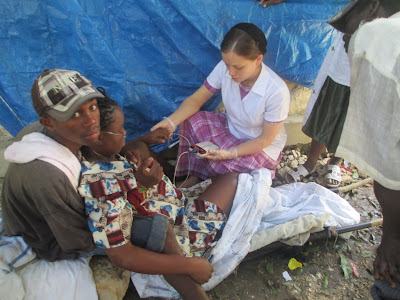 She stayed on oxygen, and we continued to monitor her oxygen saturation.
It was obvious that we needed to take her to T-Goave, but we had some hurtles to deal with before we could set out.  After Hurricane Sandy went through last week our trail was again rendered impassable by anything but motorcycles and ATVs.  Even the Bobcat/Gator machines couldn't go through.  We tried making phone calls to see if we could have someone come up from T-Goave and pick up our patient on the other side of the blocked areas, but our cell service was out, too.  Finally we decided that we needed to leave, and they'd have to carry her again when we got to the landslide if no one could meet us. 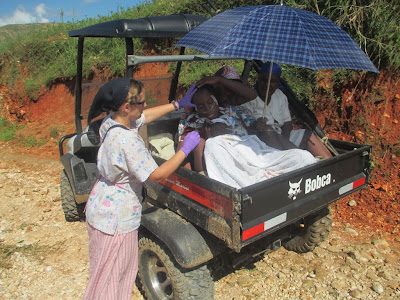 So we set off, and sent a few men ahead on a moto to meet us and help carry the stretcher later on.  About half an hour into our trip we had to stop for a bit as she had another seizure.  When she'd have a seizure, I'd turn the oxygen up a little. 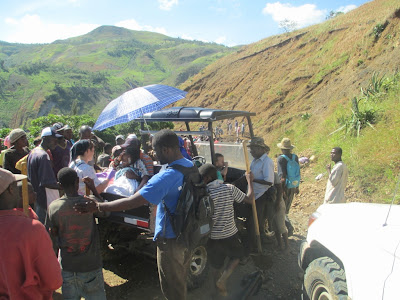 Finally we arrived at the landslide.  Then came the fun part as we tried to convince them that NO we wouldn't try going over the landslide. 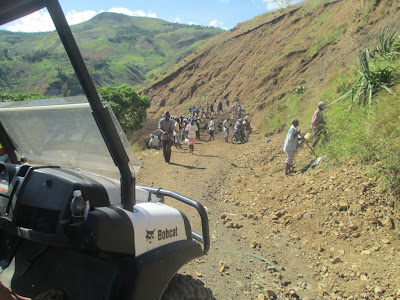 Here is the landslide just in front of us, and a work crew was working on it. 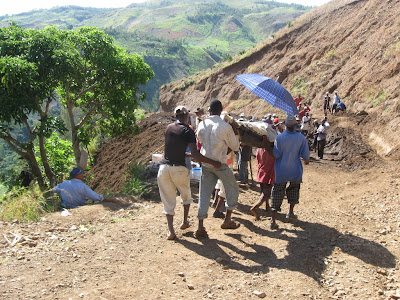 This is the crew heading off with the stretcher.