You're in the middle of a medical emergency. Heart pounding, adrenaline pumping, and hands trembling. (If you're me🙄) Your mind runs through all the possibilities and you're doing the best you know to do. Without making any mistakes. In the middle of it all, your patient grabs your bloody hand and says, "please mis, pray with me." And you stop. The words be still come to mind. And you realize that that for a moment it won't hurt to simply be still. To not do anything.  To lay down your stethoscope, strip off your dirty gloves and hold your patient's hand. I often forget that nursing isn't just about caring for their body. But for their mind and spirit too. If it makes them feel better to clutch me around the neck till I feel like I'm choking, then I'll do it😌 Nursing is hard. And down here it's sometimes quite difficult. If it's not the language barrier, then its a cultural belief or practice.  Or simply not having been educated about medical things. I so often get frustrated at how patients deal or not deal with things. But then I'm reminded that I'm lucky. It wasn't my choice or from anything I did that I was born in America where I got a full education and went beyond to become a nurse. It's not their fault that they were born here. And it's probably difficult for them to understand a white nurse who cant even speak their language properly 🙃 I have to let it go. If I've done the best I can, then theres nothing more to do. I hAve to learn to be in peace.  Not pieces.  Life here isn't all sunshine and beach trips. But it comes pretty close to that most of the time🤗❤ I've been here 8 months now and love it more each day. Running the prenatal program has definitely become my favorite job at clinic.  I'm going to put some random photos up of different things . I don't really have any wild stories to share. We've had busier days at clinic. And quite a few births and some emergency runs. Otherwise life can be called "normal". We're grateful for those of you that read our blog and support us. Even though we're not very faithful in posting 🙈
Till next time❤
When the oceans rise and thunders roar. I will soar with you above the storm. Father, You are the King over the flood. I will be Still and know You are God.
❤Mis Autumn 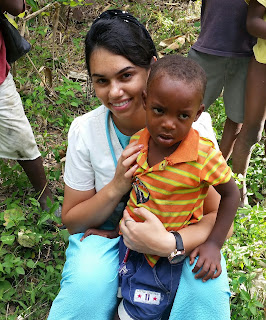 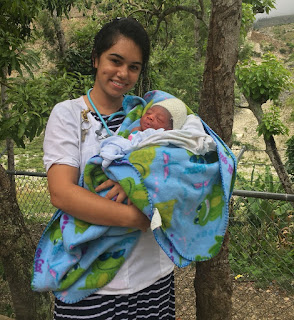 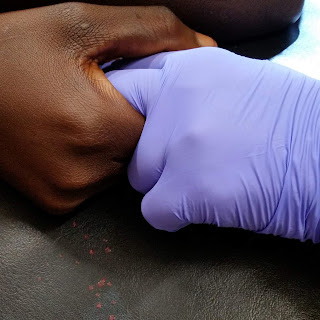 Hey everyone it's been awhile since I've posted and a lot has happened! It seems I should have no problem thinking up something interesting to tell you all but I find it kind of hard to put things into words 🙈  So here we go it was last Saturday we where in Peiti-Goave at a wedding while back home in the mountains there were two ladies in labor the one being preeclamptic, so when we got home we made the decision to transfer her out to Peiti-Goave where she would have the option of having a c-section if necessary and where we had just come from😕 we loaded up in the ambulance and prepared to deliver a baby on the way if necessary.
Off we went bumping out the trail smashing into each other and trying to keep the mom as "comfortable" as possible, we didn't make it much more than quarter way out the trail when Emma hollered that the head is crowning so we stop the machine and delivered a baby, almost instantly the atmosphere changed inside the ambulance and prayers of thanks to God were ring out of our mouths, after evaluateing mom and baby we decided to turn around and headed back to clinic, meanwhile the other nurses were busy delivering the second baby and everything went well so we tucked them both into bed and headed home knowing we could have a good night sleep. (Thank you God)
Here's a pic of the two babies that were born, I believe Emma is holding the one that was born in the ambulance and Kayla the one that was born at clinic. 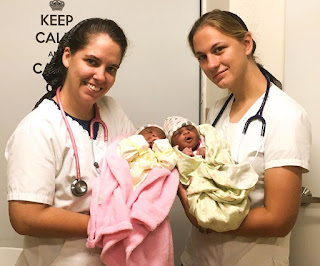 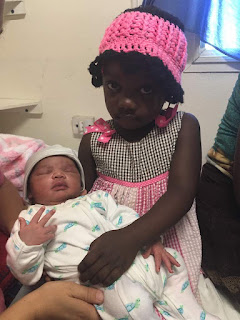 This past weekend with the help of Grampa Lewi and eveone around the mission here we got two pigs butchered and processed into all kinds of good stuff! 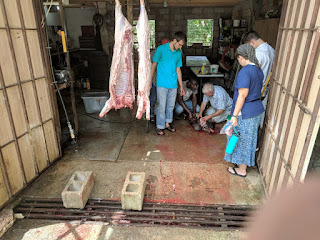 Here's a pic of Derek and Grandpa stuffing sausage's. 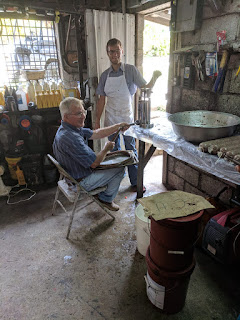 So that's just a little bit of what's been going on around here. I want to thank everyone out there for your prayers and financial support we really appreciate it!!!
Until next time ~Ben~