You all were promised an update on the births that we had last week, here it finally is!

Tuesday we had a girl come into the clinic in labor.  She had a while to go, so we gave her a bed, and kept tabs on her throughout the day.  In the afternoon, another girl came in, very close to delivering.  I was responsible for the births as Anita had other things going.  The second mom progressed steadily and delivered a whopping 8lb 12oz baby boy.  He is a really cute little buster, and his mom and uncles and aunt were so proud of him.  I don’t think the little guy has a dad that claims him.  It is so sad how many babies are that way.

We were getting ready to take the first lady out to Leogane, her blood pressure was rising, she was pre-eclamptic, terribly anemic, and not progressing the way we thought she should be for the contractions she was having.  I had checked her right before the little boy was born, and she still had a ways to go before delivery- I thought!  Anita was over in the hospital room taking care of the boy with the leg infection, and she hollered “The baby is here, bring me a bulb syringe!”  So Michael and I ran out and there lay a tiny little girl, 5lb 6oz, not breathing.  Michael grabbed her up and started smacking her feet and rubbing her briskly while I hooked up the oxygen.  Her heart was beating but she didn't want to breathe.  We ventilated her and shortly she took off on her own.  She was very sluggish though; I’m a little bit worried about her brain, because she seemed to be early.  The mom had no milk, so we gave the baby some formula and sent her home the next morning with more.  I haven’t heard back from them, I hope they are well.

The little boy I saw again today when the mom came in for a checkup.  He is so cute and big.  He has gained a whole pound in one week!  I think he will grow up into a big man, I just pray he is a big man for God.  I always wish that I could raise the babies I deliver, so that they grow up knowing of God and influenced by righteousness.

The next morning I got out to clinic, and found that Anita and Breanna had delivered a little boy already.  They both were leaving that day, Breanna to go home for a few weeks, and Anita for just a few days in town.  So I was glad that they took time to do that birth!

Thursday morning I was called at by knocking at the gate, and there was ANOTHER lady in labor.  I checked her out and she had a ways to go.  So I went back to the house to get breakfast and get ready for clinic; at someone came running saying the baby was born outside on the ground.  I jumped and ran, and sure enough, a little girl was wrapped in a sheet yelling quite lustily!  The mom had gone out to go to the bathroom…. at least the baby was healthy.  She had had 2 children already, and sometimes, things can go really fast!

That made 4 babies in 39 hours.  I was praying there wouldn't be anymore for a while.  There wasn't- till today.  This afternoon a 17 year old girl came in; she had come two weeks ago and was disappointed when Anita told her she wasn't in labor and needed to go back home and wait awhile! 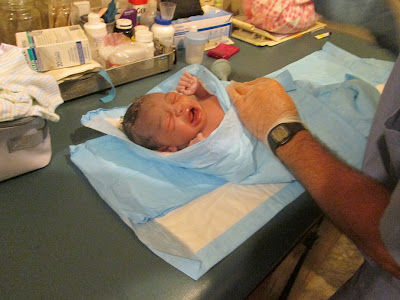 Baby #1.
Someone said this little fellow has a big mouth?   (I'm just glad he was using it!) 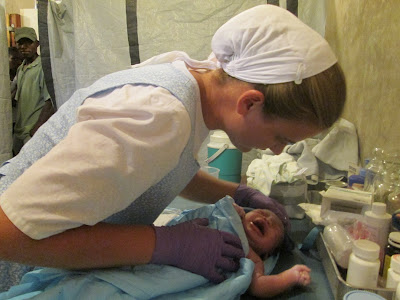 Devon Cooper helping clean him up.  She was here on a team. 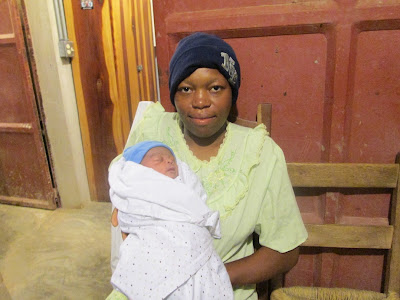 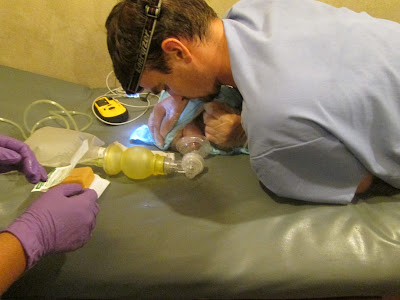 Baby #2
Michael was keeping her warm until she could come off the oxygen. 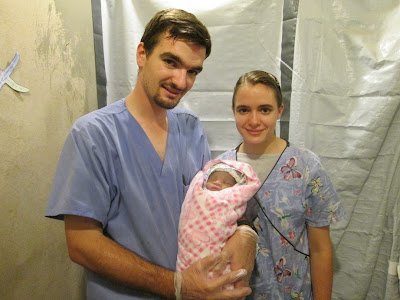 We were so glad she was ok after being on oxygen for just a short time! 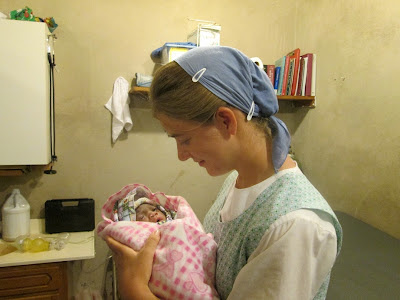 Dosei Cooper holding the girlie before she went out to her mom. 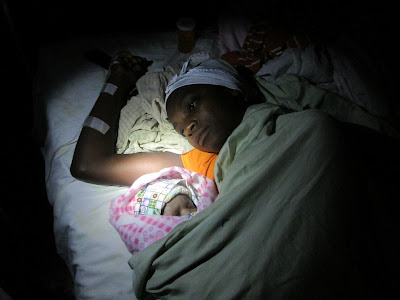