"Katie, what is wrong?" I looked hard at Katie writhing on the bed, and thought I heard her sniffing.
"I don't know," she moaned. And she kept moaning. And moaning. Then she started to gasp and sat up straight on the edge of the bed.
Since she had just showed me a lot of hives that were big and welting on her skin, I really took this seriously. She seemed to be in major distress.
"Katie can't you breathe well?"
"I don't know what is wrong," she said.
I picked up the radio and called Anita. Then she called Steve's down to our house.
"We need to put her on oxygen," someone said. And that was where we all took her next. A few of us carried Katie out to the Bobcat, and from there to the clinic bed.
Kate's oxygen stats were not good. And she was still struggling to breathe. "Hold me tight, I can't feel right. My hands are numb."
"We don't have any epinephrine here," I said.
"Get me some albuterol," Kate gasped. We gave her some, but it helped very little. She was still calling out for us to hold her. People were gathered around praying out loud while we tried to put ice packs on her hot, swollen skin.
"Hold me tight," she kept begging pitifully.
"We're right here, Kate."
Other wonderful people were swarming around getting oxygen ready to send out with us for our trip to the hospital, and finding clothing for Katie, in case she stayed at the hospital for awhile.
Then the trip to town started. Kate was wearing out. Anita was checking Katie's heart rate, and holding her feet, while we continued reminding her to breathe....or holding ice on her hot skin.
It was so long. That hour and fourteen minutes.
I kept praying that we could get there faster. And we did break a record in our speed!
Kate would say, "I can't do it anymore."
And we would pray and tell her to breathe again. 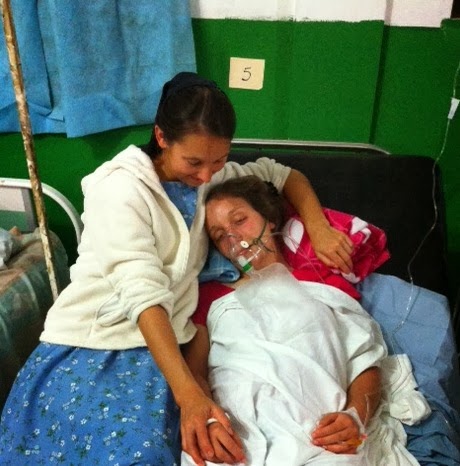 After an IV was administered, it was only a matter of minutes before Katie was breathing better.
After an hour or two of vigilance at the hospital, we asked if we could take her to Darvin and Joanna's house in town, if we took some medicine along and were prepared to administer it at any time.
The doctors eventually agreed, and we spent the rest of the night vigil at Darv's house.
After a somewhat restless night, Kate was starting to get really itchy again.
"I think we better start another IV," we said to each other. Poor Katie, all this pain. And so unrelenting! She was so exhausted.
After the IV she could breathe a bit better again, but she was so itchy. Her skin was just so warm. Just sad. Looking at Katie made me want to cry. Why did God allow this?
But the point is that God would be glorified. And I want to thank and bless Him
for allowing Kate life again. Please keep praying for her, because she is still very weak, and feels a need for prayer. Especially. The spiritual battle is a real thing here, and we really depend on the power of God to sustain and work for us. We are hoping that as Katie returns to the States for a bit of a break, that we all can rest that God has a plan in what He is up to.
We haven't been writing a lot from our clinic corner in the last weeks. So much has happened. We had a Sunday when four people were brought in after a motorcycle accident, and our hospital beds were completely filled up with people. And there was a premie baby that blessed us with life for one day. And there was a big splinter we pulled out of a poor little boy's foot. But it is all a part of January in Haiti which struggles to find a normal. If you know what I mean.