Shots from the Mobile Clinic

…and stories from the "misyon".

I'm sorry this update is a little out-of-date.  I'm back in the States for a month trying to juggle work, weddings, and everything else that has piled up on my need-to-do list...like write a blog update on the mobile clinic.  :)

*June 5th*
Thursday afternoon Steve, Kate, and I said sad goodbyes to the ones of our group staying behind to man the mission and we, along with several Haitians, started the rugged ride down the mountain to Ti Goave.  Our rig was full to the brim with people, backpacks, and lots of supplies that made for some tight seating places, but we had so much fun laughing and talking with the Haitians all the way, it definitely made for a joyride.  :)

We spent the night in Ti Goave at Pastor Levy's with plans to leave for Delot early the next morning.   Well,  we learned that "early" is subjective, but I don't think we even left early by Haitian time.  "So much for getting up so promptly!"  we thought.  :)   Pastor went ahead of us in the bobcat to lead the way and we followed after,  beginning the slow four-hour climb up the mountain. 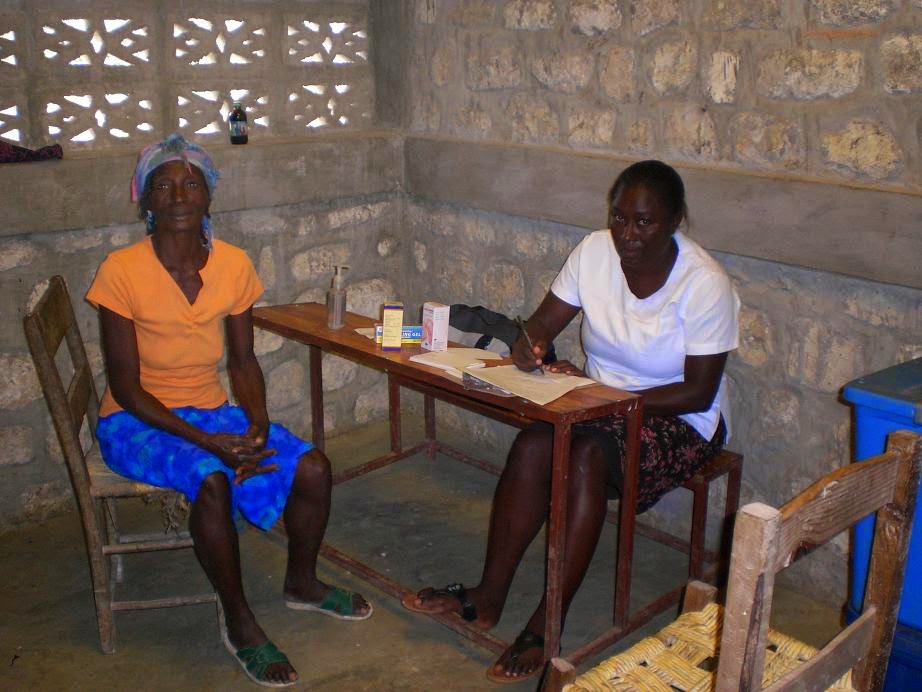 That night all the guys slept in the first couple dorms, and Kate and I slept with all the Haitian ladies in the other two dorms, spreading out our blankets on the cement floor and piling in for the night.  Well, we did  slumber some that night, and it was  its own kind of party, but not exactly what I think of when I think of a slumber party.

The next morning started at about 4:00 for us.  It started out very slow as a song- or a moan, I'm not sure which, that one lady sleepily began mumbling.  Before long it picked up in rhythm and racket as two or three more ladies blended with her, and soon the whole room was one lusty choir, clad in bed-gowns and blankets.  Imagine a dark room with only the light of a couple small flashlights, just enough light to see shadowy forms sitting up in bed all around the room, lifting their hands, singing, and praying…    As drowsy as we were, there was no more dozing through it.  Kate and I pulled the blankets over our heads and heartily laughed our sleepiness away until we reckoned with the idea of being awake so early in such a fashion, and then we joined in with the singing.  :)

The main purpose of the trip was to do a "misyon" as they call it, where a group of Christians go trooping over the mountains, singing, praying, and preaching.  So most of the Haitians left mid-morning to go do that, and the rest of us stayed behind to run the clinic.

Clinic was nonstop that day, with a seemingly endless stream of patients coming to be consulted.  Dr. Felix had left, so Kate and Mis Joseline worked relentlessly to keep the lines moving.  Steve and Zita, our Haitian pharmacist, faithfully filled prescription after prescription in our makeshift pharmacy, and I ran between taking vitals in the waiting room and helping them back in the pharmacy.

With a rough guesstimation, I would say that 75% of all the cases we saw over the weekend were simple things like colds and coughs, with the other 25% being more serious medical cases including extremely high blood pressures.  For all those people, we gave them appointments to come see us at our clinic where we hope to be able to treat them more long-term.

There was another service at 5:30 that evening, so after we filed the last patients through for the day, we ate some food, closed up, and took a little hike to a Pastor's house where they let us shower and clean up for the evening.
By the time we got back, the service was well underway.  The singing went on long enough for the sun to set over the mountains, and then out came their makeshift generator-powered night light strung up on a tall pole.

As the service went on and we lost ourselves singing our hearts out with all those Haitians, it gave me a very small, but very stirring glimpse of how awesome it will be to stand before God someday with Christians from every tribe and nation, singing, shouting, and dancing for joy before HIM, for what HE has done for all of us!

Several different Pastors preached that night, and as the singing started up again, one Pastor asked who was going to come and be saved.   Quite a few people went forward.  I heard that forty were born again over the weekend.  But that night one young lady went forward and when Steve and the Pastors laid hands on her to pray, she started throwing herself around uncontrollably.   She was demon possessed.

The excitement showed in the increasingly fervent singing as everyone started standing up on the benches to see what was happening.  It took half a dozen men to contain her, and carry her down into one of the dorms where a group of Christians continued praying for her there to be delivered.    They were all still in there praying after the service ended.  I met up with a couple of the girls' friends who told me that she had told them the day before that she didn't want to get saved 'cause she wasn't ready to yet.

After that I joined Steve and Kate in the dorm where several Pastors and a group of earnest Haitian Christians were still fighting in prayer against the demons still controlling the girl.   The Christians linked arms and formed a circle around her, and the demon would throw the girl against them to try to escape.   Pastor spoke with the demons and they told him their names, and where they were from.  It was all so real.

One of the young Christian men who was leading the praying and singing asked if there was anyone in the room who had any sin in their lives.  My prayer was, "God, free me from my self!"  I just saw so clearly how I only had as much power against Satan as I had been living in obedience to God, dying to my own self and living as a sacrifice…  It was a challenging time of searching our own hearts.

We continued praying in one corner of the room while Pastor Levy and others prayed with her in the other corner, and she was finally delivered!  I didn't get to see her after that though 'cause Pastor Levy said she was physically exhausted and thought we should all head off to bed right away.

There was much more that went on that night.  We all saw the real power of Satan, and some felt personally attacked by that demonic power, but we were never afraid.  Though we know we're personally powerless against Satan's power,  we know that God has won the victory over him already, and we witnessed His power and victory that night!

Sunday morning we had a very lively, refreshing church service in the local church there, really close by.   Again, we all sensed the power and reality of God and left with very full hearts and minds.

We left just before church finished and walked back up to the dorms to start packing up the clinic, but not in time before church let out and a rush of people decided this was their last chance to get any medical help for a long time!  We ended up seeing probably between 30 and 40 people, but thankfully none of them were seriously ill and mostly just needed a vitamin or worm med.  :)

So we did manage to stuff everything and everyone back into the vehicle and wind our way home!   We had some very good talks on our way back, and sometimes very funny exchanges as our tired bodies tried operating under our more tired minds…or vice-versa, I can't even remember.  :) But we did make it home late Sunday night and were quite happy (though none were as happy as Steve and his cute little wife to be together again;) to rejoin the rest of the team!  They had had their own set of stressful excitement running the mission short-staffed, with two births, lots of bandages, and all kinds of other things.  They were troopers!

I'd say this update is long enough to make up for me not having to do it the whole time I'm gone!  :)  God bless you all!   Please remember to pray for us and especially for the girl I wrote about...