Who would have ever thought you could do this:  Fall off your horse, cut open your eye lid, slice your bottom lip, scrape up your top lip, AND, get this:  Disconnect your bottom lip from your gums/jaw inside.  You can see all the way down in between his lip and gums (you can't see the bottom). We sent him to Ti-Goave for further treatment. 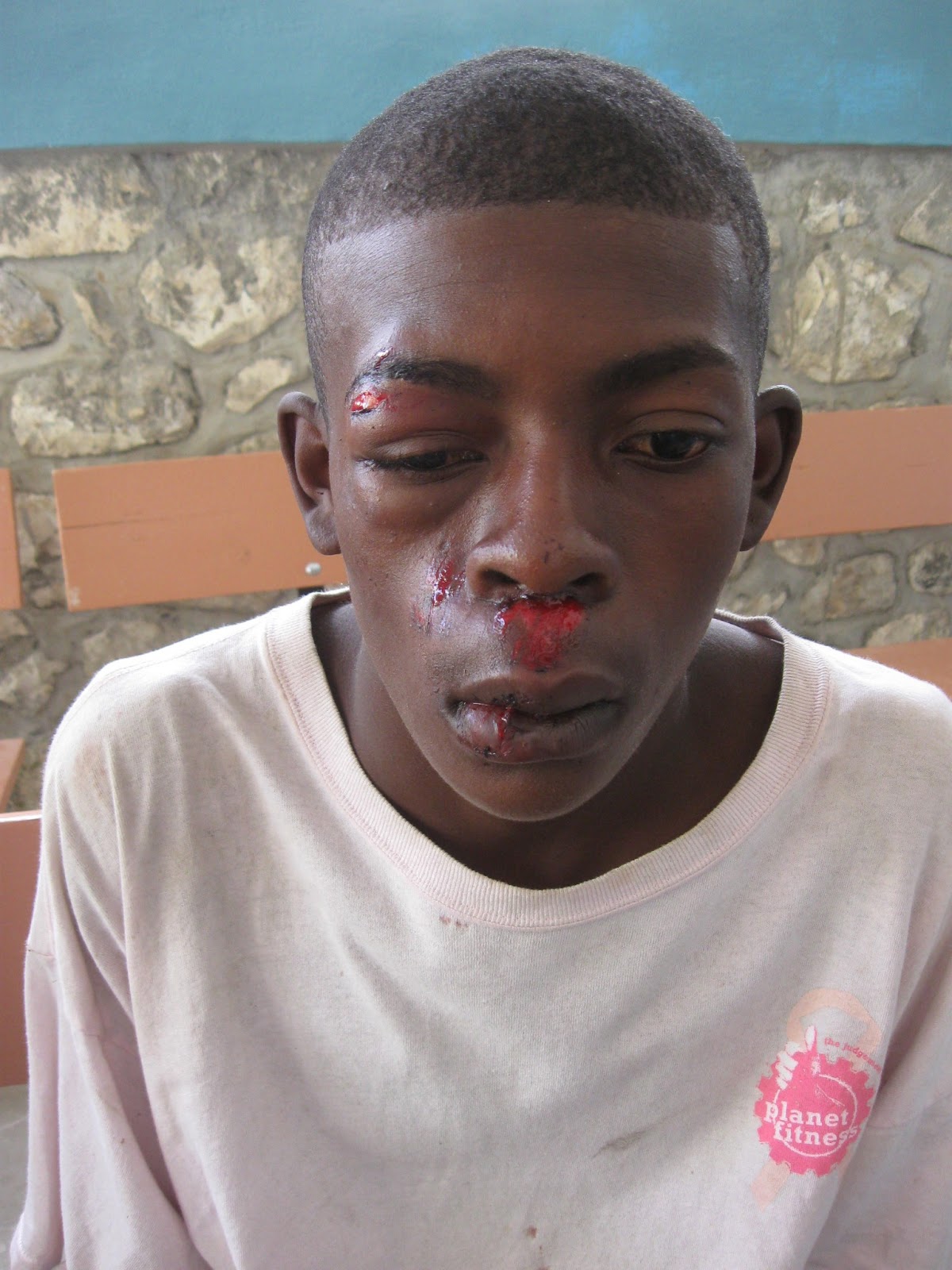 The Cry of the Abandoned, Can We All Hear The Cry????

Jistin's Story
Here is a sad story and I will try share it even though our hearts are hurting and feel very heavy for this little man.

Jistin, (Name given by Vicson, the caretaker.) is between 18 and 20 months old, this morning at 9:30 his dad came and rattled the clinic gate and Vicson, the young man you see sitting beside Jistin, who is also the gate gaurd at the clinic today opened the gate, and dad and son came through, dad told Anita that he wants his little boy's back checked out because he figured there is something wrong with it since the little boy couldn't walk yet.
Anita then told him to fill out a (dossier) in order for him to be seen and all the information could be taken, that is when the dad went to Vicson at the gate and told Vicson that he doesn't have any money and asked if he would take care of the boy until he got back with money. He had told Vicson that he is going to Granfon which is about 30 minute hike or so. But hours went by and nothing happened, the little chap hasn't cried at all, around 3:30 Vicson came over to the base and as you see on the picture they are eating some food.
This little man was shovelling rice as quickly as he could process it in his mouth, he was quite hungry. Brought tears when I watched him pain stakingly pick up all the rice that fell on his shirt and onto the bench.
So now what? Where does a person turn to in a situation like this? What would you all do? I beg that you would all gather together and plead with God for wisdom.
Vicson is 22 years old, a friend of mine, his wife is 27 years old and they have a little 2 month old baby themselves, but he said that he is responsible for it because he agreed to take care of him, so he will go and talk to his wife about the matter and if she agrees they will go talk with the area judge (Kazak) and he will issue them a paper that it is legal for them to keep the child and look after it, waiting, hoping and praying that the dad will return. Please also pray for Vicson and his wife that they would agree to take care of Jistin for now and also wisdom how to deal with him if it happens that they need him for a while.The dad isn't known to us and neither does he live in the area, we don't know either if Jistin has a mom. I again beg with you that you plead with God together that he would soften the dads heart and come back for the Jistin.
I will try to keep you posted as much as is possible. Remember that God knows the situation but we need to talk to Him about it in order for Him to give us an answer.                       Jonathan
By Anonymous - February 26, 2013 No comments: