“We need you Mis. My dad fell of a horse and his pain is eating him”. I smiled to myself at his way of explaining his dads pain and assured him that we’d come see what was up. Ben, Autumn and I ran down to clinic to find him on a typical ‘lil make-shift cot right outside of our clinic gate along with a crowd of people. We transferred him to our emergency room and did a quick assessment. He had a large hematoma on his forehead and when Autumn moved his arm his upper arm showed an “elbow” where there isn’t supposed to be one...a very broken humerus and none of us found it humorous. :) We set and splinted it and put him in our hospital room for the night and Ben transferred him to a hospital in Grand Goâve early the next morning to get it casted.
That same afternoon, he shows back up at clinic on a moto...just like he left. No cast, just the same splint we’d put on him. I think every single one of us groaned. He had an ex-ray from the hospital but said that the hospital in Grand goâve told him that they don’t have a Dr who can set and cast bones for 2 more days and advised him to go back to the blans (whites).
Backing up a ‘lil, in the meantime we figured out that he was the father of two brothers who had robbed our mission a couple years ago. They had broken into one of our houses while everyone was gone and taken quite a few electronics and cash. Since then, different ones have been able to become friends with them.
Anyways, so when their father came back to clinic that afternoon, we had no choice but to cast his arm. None of us current nurses had ever done a cast before so it wasn’t the speediest process ever. We had had a long day and I think most of us were tempted to feel very discouraged and pretty annoyed at the lameness of the other hospital. We had invited company for supper and we would’ve all loved to be enjoying good food with them.
The dear ‘lil old man was incredibly tough and had an amazing pain tolerance. He had to have been in a ton of pain but he just sat there and grinned as I cocked his hat to the side (just cause that’s what I do to people who wear hats to clinic. For no reason, it’s just a weird Emma-thing and I’m not even embarrassed about it). His wife just sat there with a very calm and concerned look on her face the entire time and his son (the one who robbed us) was a huge help as we casted not only once, but twice. We casted the first time and it didn’t seem quite right. I had this weird gut feeling about it and Kayla and Ben seemed like they did too so we proceeded to remove it and start over. Anyways...in case you didn’t know, casts are super hard to remove without the proper equipment. It took probably an hour to get it completely removed before we could start over. His son was a huge help to us. He did most of the cast removal and we actually had a lot of fun. We did the 2nd cast and were MUCH more satisfied with how it turned out.
As they were leaving, and I stood there pondering the last 24 hours events, all the confusion made sense. The robber, the very un-Christian family, The broken arm, the lame hospital and the Gods love in our hearts. God gave us the opportunity to spend several hours working closely with them and serving them in that way and looking back, it was beautiful. Yep, there was quick research and quite a bit of sweat too but I think it was Gods plan and I feel honored to be a part of His kingdom.

Look past the unknown and allow God to use you. Lend your ear and offer that cup of cold water to the least of these today, friends. It’s worth it. Very worth it - I promise.
I’m posting a few photos of Ben, Kayla and I doing the cast. Enjoy. :)
-Mis Emma 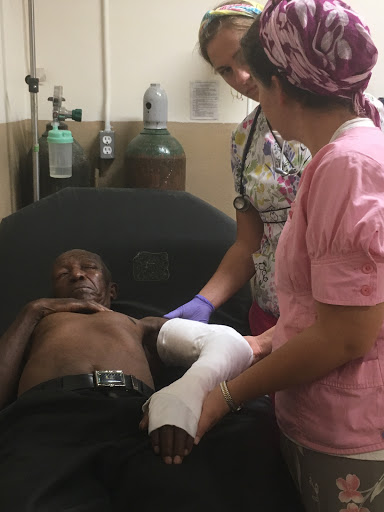 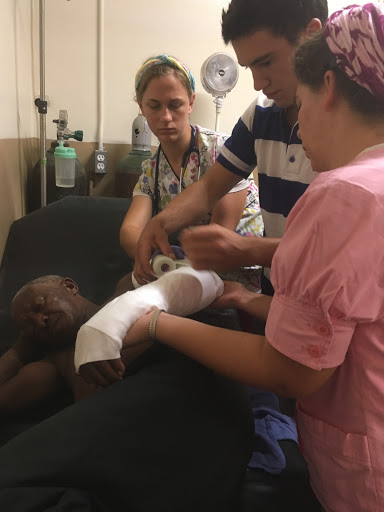 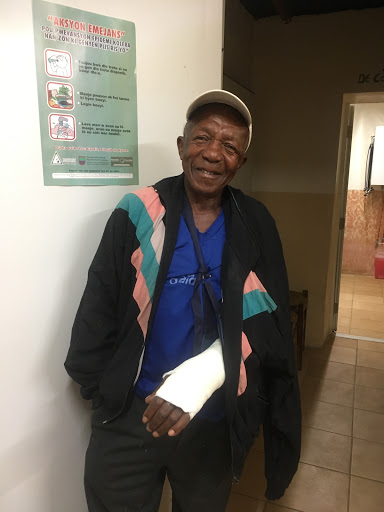