This morning we were very happy to send our malaria patient on her way.  After 4 liters of fluid, IV and 3 doses of chloroquine, she was in much better shape.  It's always so encouraging to see progress. 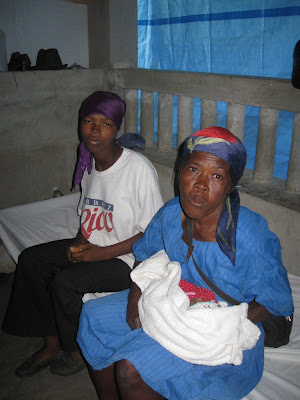 Email ThisBlogThis!Share to TwitterShare to FacebookShare to Pinterest
Good-morning! With coffee behind us, it's time to unlock the gate and face another morning at the clinic.
Yesterday was an interesting day, with some twists to it. We started off with our re-bandaging patients, and then swung into the day. Thankfully, they looked pretty good, and we even sent the one man home with supplies to bandage his own foot for a day. He seemed almost pleased with the idea, so I hope he does a good job at keeping it clean until we see him again.
About mid-morning I was doing blood pressures and noticed a rather limp looking woman with a baby. The man who was helping her move from chair to chair in the waiting room tried to talk to me, but I didn't ever quite figure out what he was saying. Later on, this same lady landed in our bed in the hospital room. Her blood pressure was quite low and she needed rehydrated with IV. Anita thinks she might have malaria. The baby seems to be fine as long as they remember to feed it. 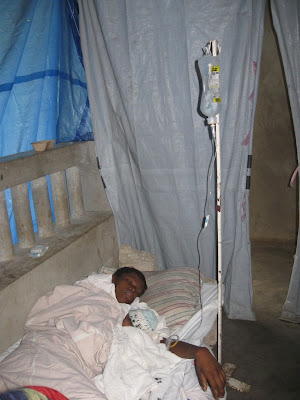 The lady with malaria and her baby

A bit later on, a girl who looked about seven came in with a nice slice above her eye, in contour with her eyebrow. She smiled sweetly at me as I grabbed some Iodine and began to clean out the stony grit and stuff from the cut. She was pretty brave until Mis Leda actually started to prep her for some stitches. She had her face basically covered with the Sterile Paper from the glove, so I don't think it was that she was seeing the needle, but she began to show her personality. Another wise nurse asked the mom to sit in the hall. It  seemed like she was "hurting" about as bad as the child, and making some amazing faces, though not as much noise as her daughter. 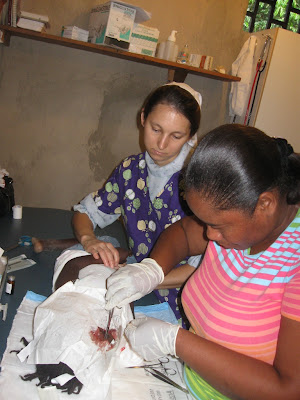 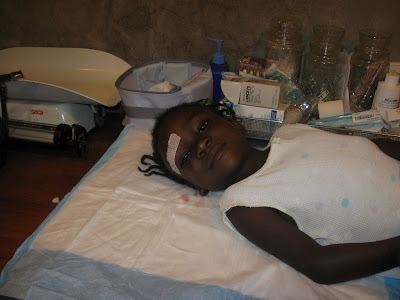 After two pieces of candy, about six stitches, and a band-aid,
we got at least a slight hint of a smile from the little girl and told her good-bye.

Another lady appeared with friends who said that she was vomiting blood. The nurses helped her to the other bed in the hospital room and prescribed some meds. She spent the night at a neighbor's house to give her time to stabilize. Maybe it sounds like a stomach ulcer? We thought we heard some of her friends singing to her when we went out to change the IV in the hospital room at dark.
Efadel seemed to be chipper today. He was sitting outside when we closed down clinic and grinned at the silly Band-Aid when I stuck it on his leg. We grabbed some pictures of him again just for fun. 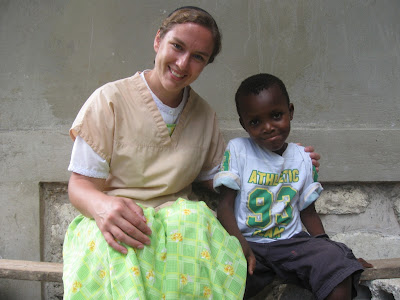 Thankfully, our day was a good one. I looked back and thought about the lady waiting for a consultation, who decided it was time for a nap. I don't blame her. It does take patience until it's your turn to receive attention around here. Most times, with a few good laughs from the Haitians and a couple apologies from the rest of us, they all accept it as part of a day. So we try to do so, too!:)