Yesterday afternoon/evening was very sobering and sad for us but also very exciting!

This is just a little update about the lady that we blogged about yesterday with heart failure.  As was mentioned, when she came in, she was in bad shape.  I quickly got her on oxygen in an attempt to stabilize her.  She soon calmed down significantly, and after checking a few more things out, I went home.  Mis Joselaine was on call at the clinic so I knew she'd alert me if there were any big changes.  When Mis Joselaine headed home at 5:30 she reported that all was well with our patients.

It wasn't long after that we got a knock at the gate saying a nurse was needed at the clinic.  I was soon going to go down anyway just to do an evening check on everyone so I soon headed off.  As I walked in my first patients seemed fine, but in the back corner, I found the lady with heart failure laying on the floor with her oxygen off.  We got her back in bed and oxygen back on.  At that point what I saw alarmed me because from 3 pm - 6 pm she had worsened noticeably.

I then came home and discussed the situation with Steve and Shana as I realized we may need to take her out.  Michael went down with me to give a second opinion.  Our conclusion was that she was indeed in very serious condition--likely have repeated heart attacks.  We wouldn't be able to find the help she needed in Ti-Goave and likely the trip to Port-au-Prince would be too stressful for her.  Even there the chance of finding any real medical treatment for her condition was pretty grim.

After again having a little meeting with Steve, we went down to talk to the family about it.  In that short time, we again noticed that she was going down hill fast!  We also asked Bro. Claudener to come pray with her.  Michael had tried talking to her, but she was almost in and out of consciousness.  I feel God gave her a window of alertness as Bro. Claudener was able to talk with her and lead her to the Lord.  We stood around her bed and prayed, sang, and rejoiced with the angels.  One of the songs we sang was, "What a Friend We Have in Jesus".  In Creole the ending lines are, "He is waiting for you with open arms, Jesus wants to give you life."  As we repeated that line, we had no idea if she had a few hours or a few days. 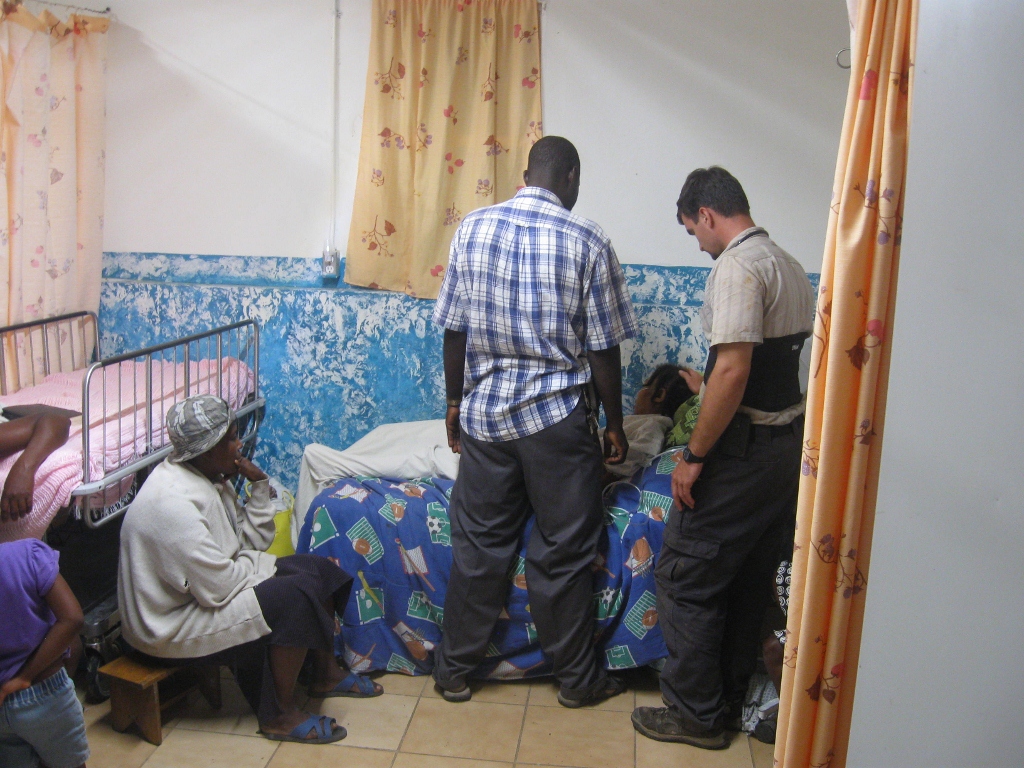 Praying with the lady

The decision was made not to take her to town.  We'd let her in the hospital room over night and if she lived through the night, she'd probably go home to die.  After wrapping things up, we again headed home.  Now at about 9:30 pm the last few of us sat down for supper.  We were still eating when Nate, who was taking our second oxygen tank down to the clinic, called on the radio saying she was gasping for breath.  Michael headed back down.  I didn't feel like I was needed at the clinic so soon headed to my house.  Yes, sooner rather than later Jesus called her home!

She was a young women of only 32 with 2 children--11 and 6.  Sometimes we don't understand, but it's comforting to know it's all in God's hands!  Days like that are very hard, but also rewarding when even on death's door, you get to tell someone of Jesus' love.

Pray for her family and pray for us, especially clinic staff, as things like this aren't easy!