Once upon a time....a not-so-very-long time ago....last night, to be exact.  We were sharing a peaceful evening of counting pills around the table, when - in a rather non-peaceful manner - there was a knock at the gate.

Somebody that was a relative of somebody else had gotten beat up by something somewhere.

Don't laugh.  And don't bother being exasperated by the complete lack of information in that sentence.

Well, not a complete lack.  We knew somewhere in a general direction was a thirty year old female, who was somehow related to one of our neighbors.

So Brandon (side note - my cousin arrived with me when I returned home from home ( side side note - I was home for two weeks to see my family and just returned on Monday) to replace David as the mechanic when David leaves next month - yay! - to my cousin coming, NOT David leaving), Mali, and I jumped on a machine to go pick up this wounded person.

We met a crowd on the trail, carrying a wounded person that Mali was quick to point out was NOT a female.  It was actually a young man that is this neighbor man's nephew.  While not someone that I really know at all, his face was familiar to me, since he lives not too far from here.

We loaded him up on our machine to carry him back to the clinic, along with the two rather ashamed shirtless men that had been his chief carriers.  They had apparently been bathing when they heard a cry for help and they didn't take the time to get fully clothed before running to his aid.

Upon our arrival at the clinic, we were able to get our first good look at our patient.  A young, totally unconscious man, who - if you were to believe the local gossip - liked to fight.

It would seem this evening's fight got a little out of hand, and that he may have picked a fight with the wrong guy, judging by the size of the lump on his head.

We were in the midst of taking his blood pressure and doing a quick assessment, when he suddenly started seizing.  Mali and my eyes met, as we both wondered out loud if we should call Donny to ask him how he felt about us making an emergency run out to town.

Donny said that he thought that that would be fine, if we thought it was the best call for our patient.  We agreed that we weren't comfortable keeping him at the clinic here, so Mali started in on a quick stitch job on the cuts on his head, while Brandon and I worked on getting everything else ready for a run out. 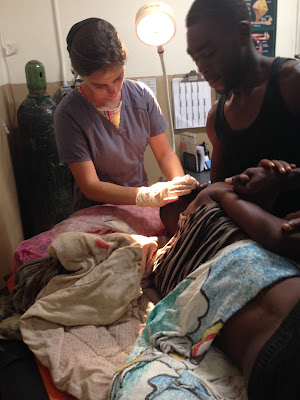 Most of the rest of our crew showed up before she finished, and were there to see us off as we braved the mob outside the clinic.  Everybody pushed in to see the guy on the cot, and his MANY distressed family members all had opinions about who the two people allowed to ride along would be.
As I squeezed my way through the crowd to climb on the machine, I saw one of the two men that had been carrying him off to my right (now shirted), raising his hand and saying, "Thank you, God".  I told him he should also tell the pushing crowd to step back a bit, to which he instantly responded by yelling instructions (COMPLETELY ignored) to the crowd to move back; after which he looked back at me, shrugged, and went back to thanking God.

We finally just cranked the machine up and started moving, and people slowly moved out of our way as we went.

Just as we were starting down the trail, our patient suddenly seized up again.  His father (and the rest of the relatives still pushing and pulling around our vehicle) thought that his son had died, and started up a death wail.  Mali, who was on the back of the machine, hollered at Brandon to "Go!", and we took off.

Once we got far enough away to be out of reach of the crazed crowd, we paused long enough to ascertain that our patient was, in fact, NOT dead, reassure his father, wait for his cousin to show up with his father's phone, and secure the cot to the machine.

From there we headed out for town in earnest, and made good time due to the completely - and somewhat eerily - empty trail.  We called the ambulance just before we reached town and asked them to meet us at the Ti Goave hospital to transfer him straight to Port.

We arrived to find the ambulance waiting, and after a smooth and swift transfer, we found ourselves back on the trail for home.  We once again made good time and arrived home sometime after midnight, where we all made beelines for our waiting beds.

We were on our way to the clinic this evening when we saw one of this young man's cousins on the road.  Mali asked him what he had heard about his cousin today, and he said that he had started talking, so we are thanking God for that.

Oh, and what the fight was about?

Sometimes the absurdity of what the people that we risk our lives for risk THEIR lives for....just doesn't strike me as funny.  Mali and I were discussing it this evening and she made the comment that seeing these young guys get themselves in situations like this is heartbreaking.  And it is.

They have so much potential, and yet they choose to throw it all away for the whim of a moment, or in a sudden flash of anger.

Please join us in praying for a revival in these mountains - that our small community here could be a beacon of light, piercing the darkness around us and proclaiming Christ to everyone who sees it.

That when they see us, they would not just see blans; but that they could see the light and love of our heavenly Father shining in and through us.  Because THAT'S what we're here for.