Ah, back to blogging, and having a hard time of it deciding WHAT to blog, 'cause so many things have happened since I got back!  Maybe I should have blogged sooner.  :)  Two very full weeks have rushed by, sweeping me right back into the strong current of constant clinic commotion and everyday life in Allegré, Haiti.  Sometimes it feels a little more like you're white-water rafting through one thing to the next!  (or anyway what I'd imagine it to be like:)
So what's happened?  Let's see, there was the machete cut to a young man's forearm that took 12 stitches, or the brave eight year old boy who came in yesterday with a gash to the top of his head that took 11 stitches...  Apparently he went to bathe and slipped on the rocks, revealing plenty of pearly-white skull beneath.  And then there's Alexi, another whole story that I think Rho will tell you about soon.   It's been a very heart-rending situation to see.  He's a young man that we thought was dying of kidney failure, and then we found out someone had put a couple demons on him.  Medical diagnosis or demons?  Or both?  We can't always know, but we can always pray, and that's what we've been doing.
And those four new faces... I've lost track of order and time, but somewhere within the last two weeks there's been four births.  It must be the season, 'cause it seems like more than usual to me.
One baby was born last Sunday.  Rho and Mali had left with Donny Saturday evening with a few heart patients they were taking out to the hospital in Mirabale, so Marcile and I were on duty here.
We were woke up at 6am Sunday with someone knocking at the gate telling us a lady, named Joann, was in labor.  She progressed steadily, and by 9:00, we went to clinic to stay for the long haul, passing the time quickly tending to other bandage patients.  Janelle and Julien kindly volunteered to come down and help too, and I was grateful, 'cause we used them a lot!
By 10:00 the mother started pushing and right about then there came in a crowd of probably 15 people into the gate carrying in a lady on a cot.   You never know what kind of an emergency you'll find on a cot!   I left Marcile with the mother (who was now screaming "Woi!" with each contraction) and ran outside to check it out...
In the meantime, Janelle and Julien are making beds, fetching items, controlling the scene, and doing all kinds of other things to be a huge help!
We got the new lady, who seemed semi-conscious, in on a bed and were in the process of checking her blood sugar when I hear Marcile call urgently, "Uhhh, Whitney!?! Can you come here?  I think the baby's coming!"  I run in and decide I still have some time, told her she's doing great, and I'd be right back.  So I run back to finish helping Janelle check the new lady's blood sugar...
They told us she had fallen and hit her head and couldn't walk or talk well since then.  She was awake enough to mumble about her head hurting her extremely, enough mumbling for us to notice her difficulty talking and the suspicious drooping of the left side of her face.  She couldn't lift her left arm either, and her left eye was less responsive than her right eye.   Another stroke victim?  Likely, but then in the back of our heads we're also trying to determine if she had a stroke that made her fall, or if she fell and could have some spinal injury and/or internal bleeding from that...   But her vitals were all stable, so we decided to monitor her and get back to that baby that was well on it's way!   And at 11:15 she came, a healthy baby girl!  We prayed through that birth, and thanked God afterwards for making everything go so perfectly! 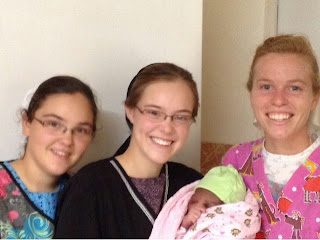 Then this past Friday we had another exciting birth in the middle of a very busy clinic day.  I was just putting gloves on to finally bandage the leg of a sweet little old man who had waited very patiently for me, when I heard some commotion outside and a serious sounding "Woi!", that typical cry of a woman in labor.  I thought, "Wow, another birth already?" and finished donning my gloves.  I wondered if it was the lady who's due that's been staying close by at the neighbors only with false alarms, waiting for real labor to start.   Right then Rho popped her head in and asked if she could redirect me to go check the lady out.  I said sure, but wondered if I'd have enough time to quick get that bandage done?  She didn't think I should wait, so I assured the man that Mis Marcile would bandage him, and that we'd give him a milk since he waited so long, and I grabbed everything I needed to get vitals on the laboring mother.  She was in the hospital room, since the birthing room was fully occupied with other patients.  I was glad Rho told me not to do that bandage first, cause this mother was in active labor with her fifth, too active to even get those vitals taken!  Marcile soon came in to assist, and after we got the mother on the bed she had just enough time to run and grab everything we needed before a chunky baby boy showed up!  We hardly even had enough time to get nervous before that one was over! :) 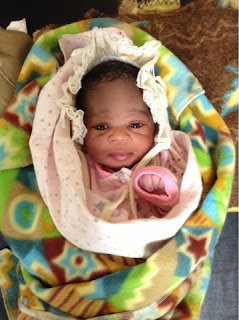 This was the first baby born the day after I got back.   Extra cute, I thought.  :)
I missed getting any pictures of the third and fourth babies, but I added a couple other cute little faces...:)  This little preemie baby girl below just came in for a check-up and to get salve to help a little eye infection. 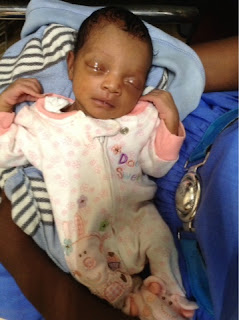 And then one more baby who's been sick with the fever lately, MaKayla Joy, who is a real joy to have around!  We were all glad to see her smiling and saying, "Happy, happy, happy!" again the last couple days.   That means she's feeling better.   :) 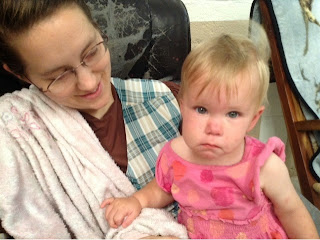 Another word on that young man, Alexi, I mentioned earlier.  We just found out that he died early this morning.  I think Rho will still blog about him.  That was hard news to hear, hard to understand...and yet how can we question God's sovereignty in letting him die when he did and how he did?   Pray for his family.  There's so much darkness and bondage there.  Sometimes I feel like I get real glimpses into hell when I see inside of people that are slaves to sin, slaves to Satan.   Sometimes it can seem impossible for the Truth to conquer and set all those people free...  At times it leaves you feeling so helplessly outnumbered.   But then I remember again, we don't need great numbers of Christians to be able to be victorious and fight, so long as we have the power of Jesus!  I remember again the reality of His power, and I wonder what I'm doing...if I'm doing all I can to live against Satan in my own life, and all I can to fight for others too...
By Whit - August 03, 2014 2 comments: