CHOLERA.
I was looking forward to being on call at the clinic for the weekend.   I assumed that with all the rain that we've been getting, it wouldn't be too busy and I could get some other little things done.  I got started about 8:30 Saturday morning bandaging several return patients and seeing a couple others.  Marcile came down to restock the pharmacy.  "Maybe today I can actually help her!", I thought.  She asked if I was having a busy morning.  "Oh, no, not really!  Just a few people, nothing serious." was my reply.    Minutes later, Mali walked in to get some meds from the pharmacy, and informed me that a cot had just been carried in with a very sick-looking boy on it.     I quickly stuffed my hands into some gloves and stepped outside to find just what she said; a very sick boy.  The crowd that carried him told me that he had had watery diarrhea since the evening before, but that there was too much rain to bring him sooner.   His altered level of consciousness and deeply sunken eyes showed how extremely dehydrated he already was!  I'd never personally had a patient with cholera before, but I remembered hearing about the certain smell it has, and I was sure that what I was smelling had to be that certain smell!  We usually send cholera patients to another small clinic about 10 minutes away that has a cholera center, but they've been closed recently, so we made a quick decision to put him on a cot in the shack in front of the clinic.  I ran to get everything for an IV.   Meanwhile Fre Daniel got on the ball spraying everything and everyone down with Clorox water.   In the process of getting the boy carried up to the shack, Fre Noas came into the shack where I was setting up and grabbed my arm saying, "Mis Whitney, come quickly! I think maybe he died, I don't know!"   I ran out where they'd set him down just outside, and heard his gurgling respirations.  "He's still alive!  Now carry him in fast!" I told them.   As soon as we got him propped on the cot, Mali and I started the desperate search for a vein that looked good enough for an IV. 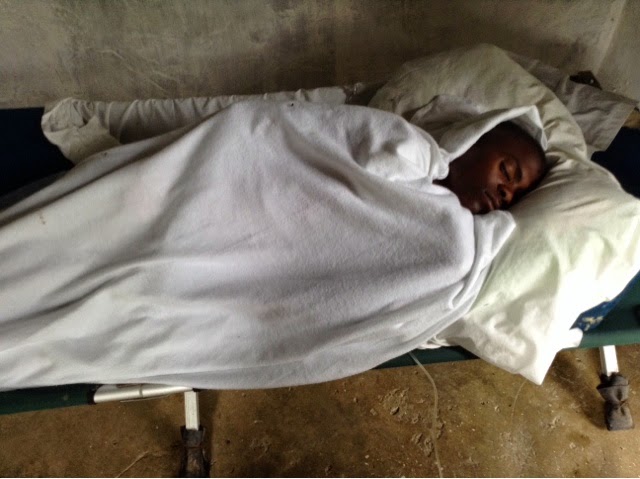 He seemed to drift in and out of consciousness as we tried and tried again for a good vein.  "Mali, do you feel like you can do this better right now?  My hands are shaking too much, and I think I could've gotten one in by now if they weren't."  But she encouraged me on, and again we prayed as I hopefully tried another vein, only to have it blow again.   We radioed Rho down at that point, and she came and calmly donned gloves to try her IV skills on the other arm while I kept searching for a good vein on his first arm.  Mali spotted a better looking vein further up his arm and offered to try it, which I thankfully agreed to.  My hands were still shaking.   We all thanked God when we heard her say, "I'm in!" and saw the IV fluid dripping into his body as fast as it could go!   Then Rho got one running in the other arm.   It didn't take long before he visibly began improving, and I started to relax.  I had felt such a sense of responsibility to help him that it almost made me panic, and I was very grateful for the teamwork of the other girls pitching in!  I think Marcile must have felt like she'd ran a mile by the time she got done fetching everything we needed from the clinic to the shack! :)  Anyway, now over a dozen liters of fluid and four gallons of diarrhea later, sixteen year old Onel should get to go home tomorrow!   This morning I took his IV out and left him with a liter of pedialyte to drink.   When I came back to find he hadn't drank much, I told him that if he didn't force himself to drink, I'd have to come put another IV in.  "I'll drink later, after awhile." he'd say, and put his arm over his mouth.  I hovered over his face with a capful of fluid, telling him he'd better open his mouth or I would dump it on his face.    He told me, with a stubborn smirk, to dump it on his face.  :)   This evening when I checked on him, again I told him that if he didn't force himself to drink more, than I'd have to force him to, and again he covered his mouth and turned his head away.   I told him that if he doesn't drink enough, he could get seriously sick again.   He told me he's not sick anymore, so I said, "Ok, then you can go home now."   Well, he didn't think he was quite that well!  And when I inquired, he affirmed that he did still have a lot of diarrhea, but still he insisted he would drink more later.   When I again held the capful of fluid to his mouth and told him to open up, he mumbled that he couldn't cause his mouth had a problem.
I asked, "What problem does it have?"
"I can't open it." was his reason.  "Oh but look, you can open it to talk!" I pointed out, at which he shut his mouth tightly and started talking like that.   Hiding my own smirking smile, I offered one more solution; "I'll help you open your mouth then!"  That didn't sound like help to him.  Finally I just laughed and told him if he's well enough to be that naughty, he's well enough to go home.  :) 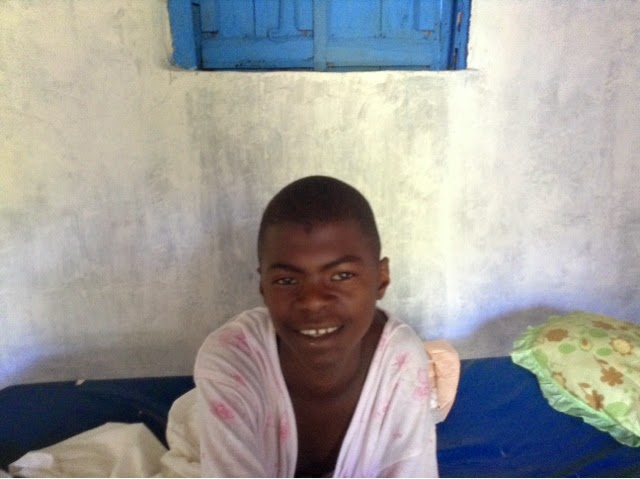 I waited to post this til this morning so I could get this photo of him...looking much better! :)   We're in a bit of a difficult position with the Bases hospital being closed, cause we aren't really set up to open a cholera center here should there be a bunch more coming, so please pray that there won't be!  Have a blessed day!
By Whit - September 30, 2014 1 comment: