It's Saturday. Maybe...just maybe...this one will be a quiet one. I had the pharmacy to get restocked before brunch, and I had it about half way finished when I walked out to see what was up with the moto that had just arrived. What I found was not very pretty....it was a man who had been beaten up for cutting a lady's hand. He was unconscious,he had a head injury, and we knew right away that we couldn't help him here. We had to decide what we were going to do with him.  Hans called Haiti Air Ambulance to see if they would come pick him up, and they were very willing to come. We quickly made everything ready to transport him on the Husky to the soccer field where the helicopter was going to land. 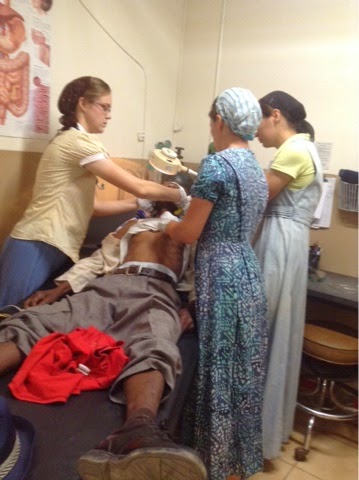 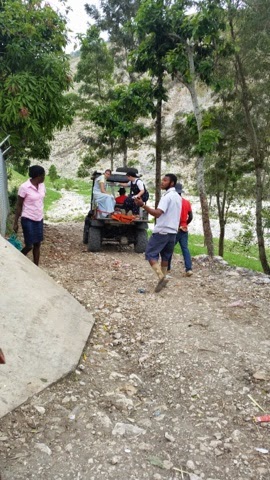 We arrived just before the helicopter did, but when we arrived, so did LOTS of people. It didn't take long for us to figure out that we had a problem---everyone that was showing up was very upset!  Upset that we were taking care of this man who in their minds is a criminal. We tried to keep everyone back, but more people kept coming. Soon the lady who had her hand cut showed up.
The helicopter personnel soon told us that they couldn't take the man, for their own safety. We knew that we had to get going, too, for our own safety.
The lady's hand had a very nasty cut in it...all the fingers had been cut, and one finger was completely cut through the bone and only hanging on by the skin. After seeing Julian and Kindra off to Ti Goave with the patients, we had a time of prayer at the clinic, grateful for God's protection during a very stressful time.
-Mis Ellamae
By Whit - March 14, 2015 1 comment: