Another baby on oxygen...

Last week was a very busy time... we had enough cases come in that I didn't post all at the same time and consequently missed some!

Here is one such case- you remember the baby that needed to be on oxygen last week? That baby was released fairly soon after coming, but not 12 hours later, another baby came in the same condition; however, this one was only 4 months old, and it's o2 sat was down in the 50's... it's lungs were filled with mucus-like substance and it was barely alive. The mother was so concerned... I came in to see them that afternoon, the baby- its face covered with the oxygen mask, tubes running from it's little body, struggling for life; the mother- who's face was streaked with tears as she looked lovingly down at her child, praying softly.

Our supply of oxygen was fading rapidly, so we decided to take the baby out to the hospital in Leogonne. 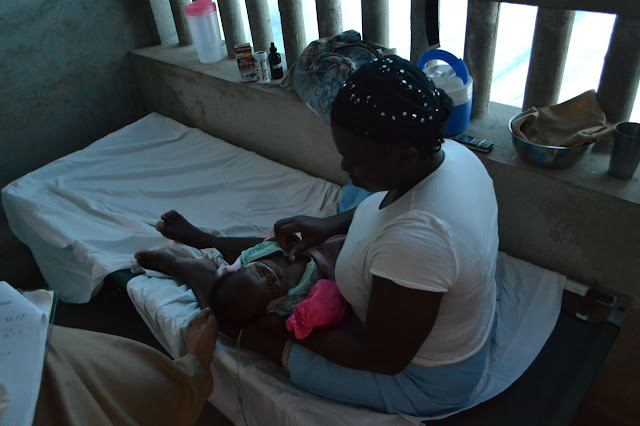 They waited in the "hospital room" as we assessed the child's condition. 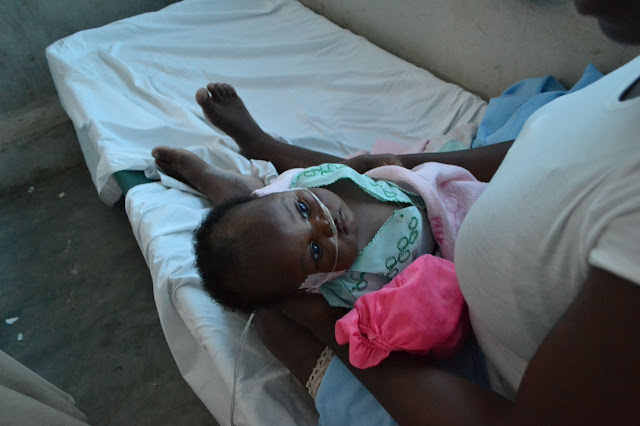 As the hours ticked by we realized we wouldn't have enough oxygen to support the baby. 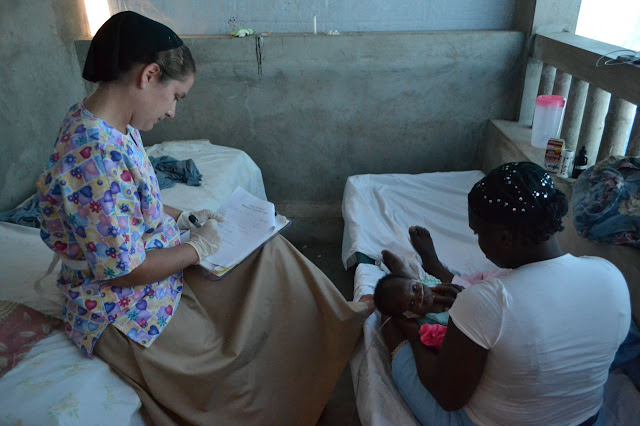 Anita took very careful note of the baby's condition as we waited... 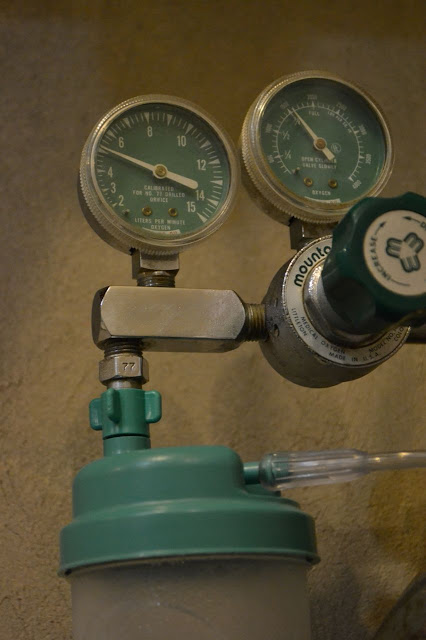 There was quite a bit left in the oxygen tank,
but not enough for the extended treatment the baby needed. 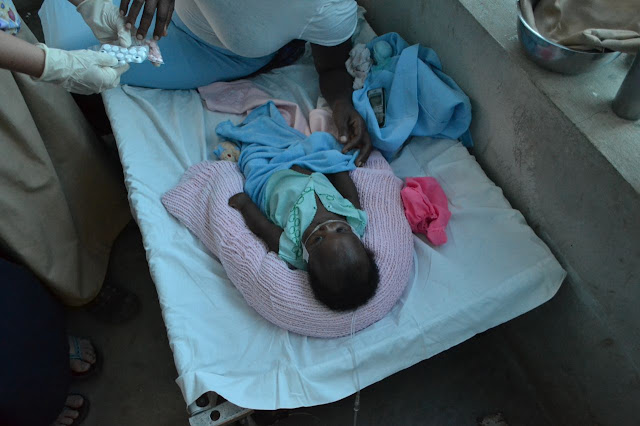 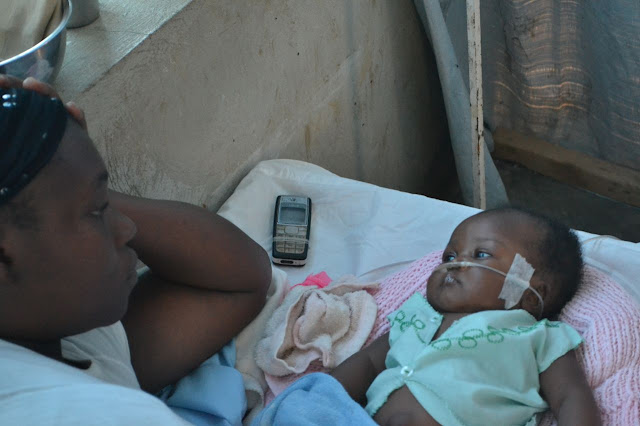 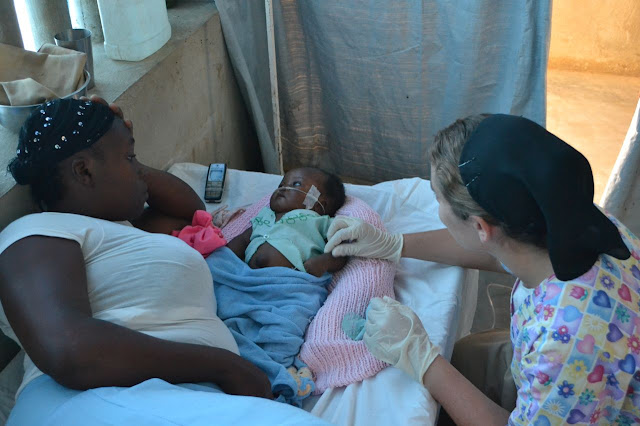 Before we left, Anita visited with the mother about our plans to go to the hospital.
We left soon after. 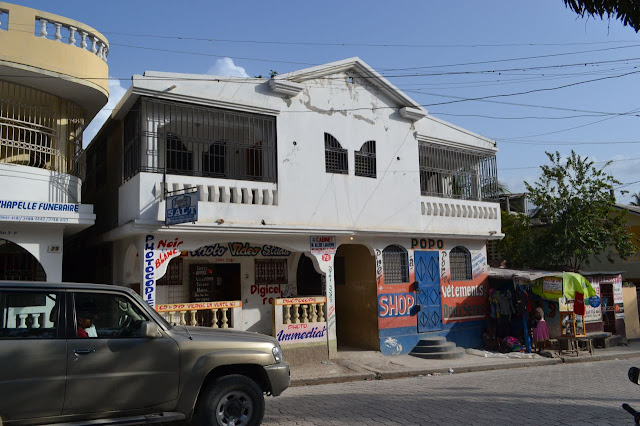 We drove one of our little machines out to Ti Guave, where we met Pastor Levy at his shop.
He gave us a full sized vehicle to take the rest of the way. 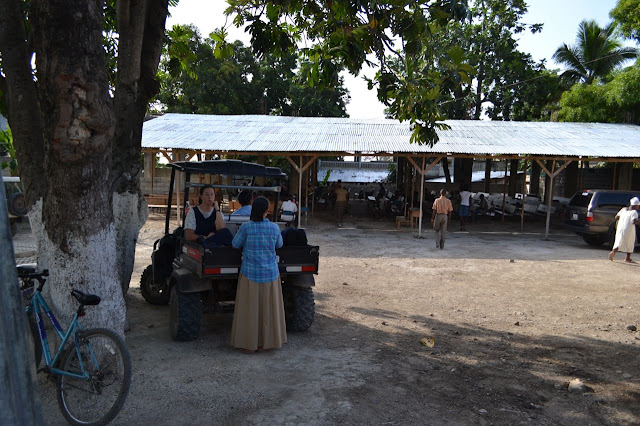 However, we had to wait for him as he got there. 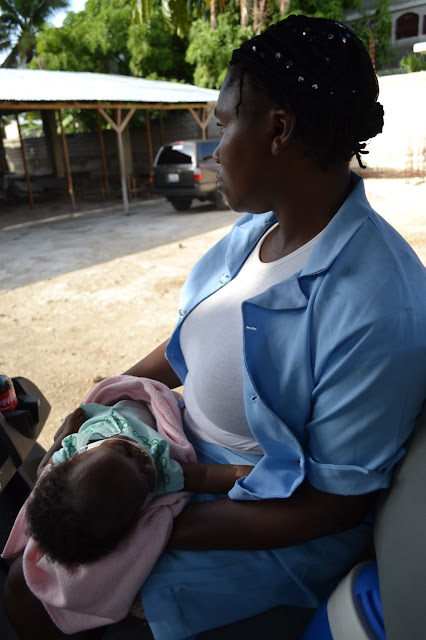 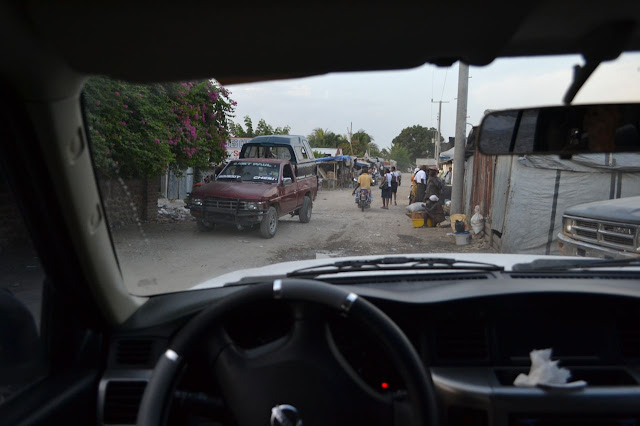 After Levy arrived and gave us the vehicle, we raced to Leogonne. 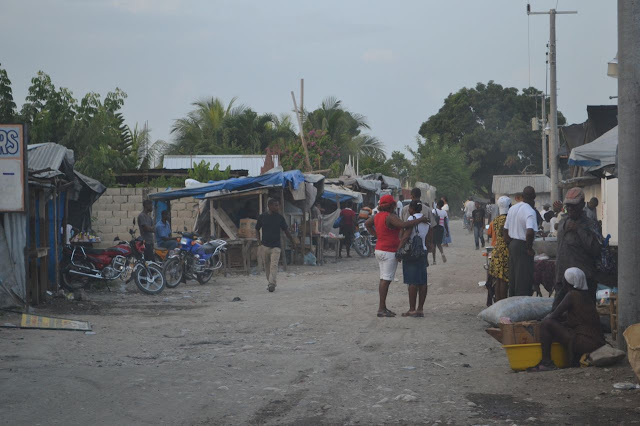 The hospital is on the right, behind a white, steel wall.
The baby was admitted immediately and last we heard it had recovered very well.

A poor elderly lady who fell...

One case that came in this last week was a certain elderly lady who fell and almost cut her ear off on a rock. We're not sure why she fell and she doesn't remember what happened (she had a possible concussion). One way or another, she woke up in her house with her ear nearly cut off.

(Warning for those of you with weak stomachs... this is pretty yuck...) 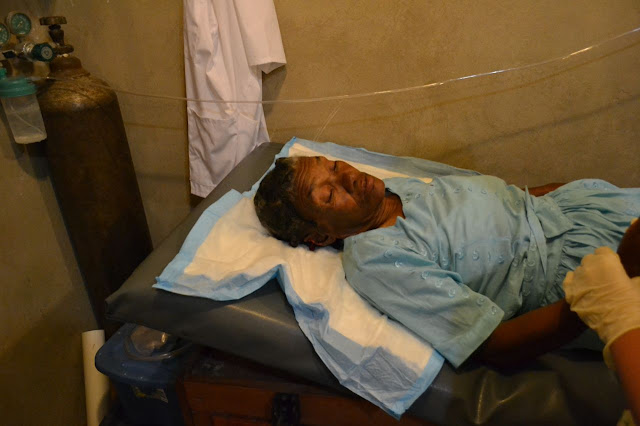 The poor old lady was somewhat confused, but very brave. 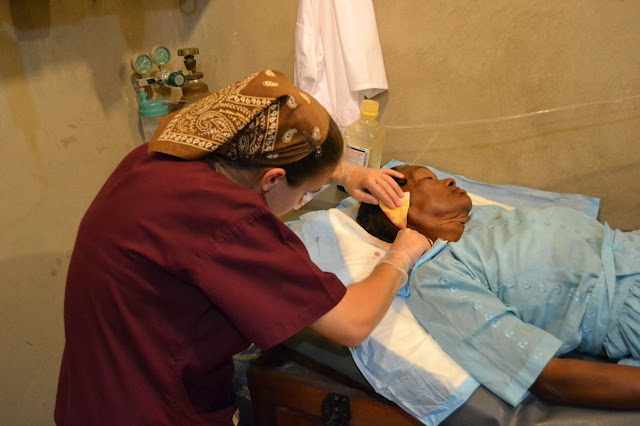 Virginia did the preliminary cleaning and sterilizing. 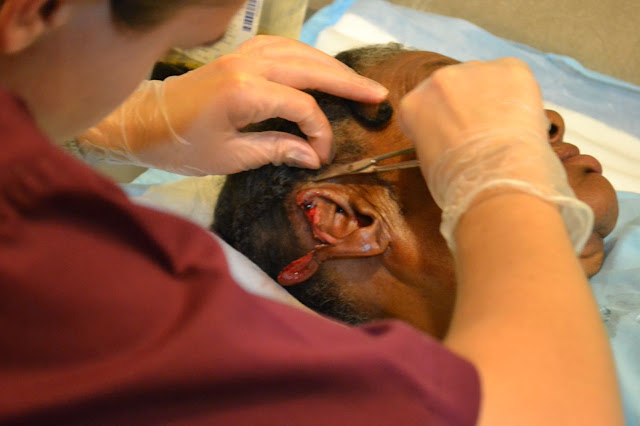 This is probably the first good look at how bad her ear really was.
Another half inch and it would have been completely off! 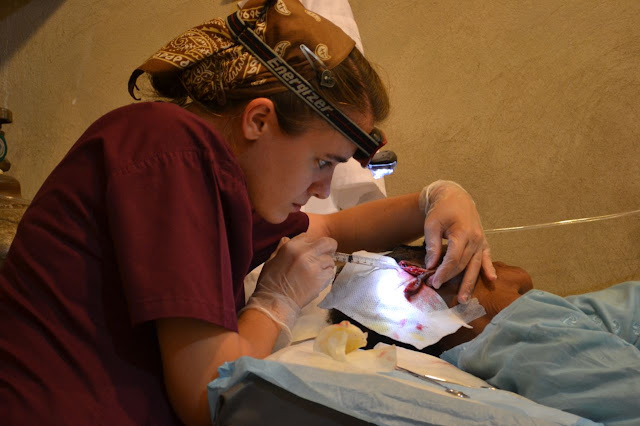 Administering lidocaine before the operation... 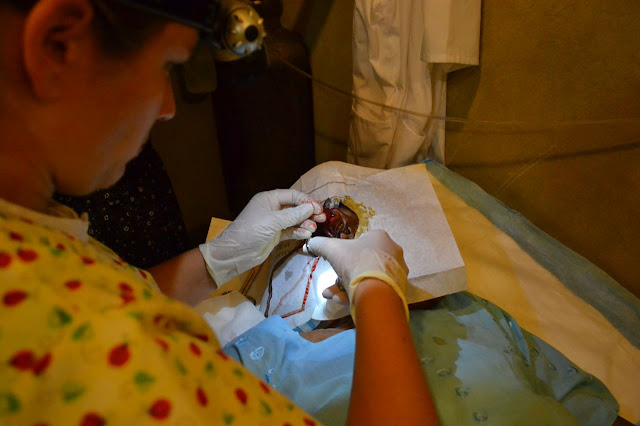 Anita did the stitching this time around.
There were three places to be stitched:
The front of the ear, the back of the ear and a place on her skull behind the ear. 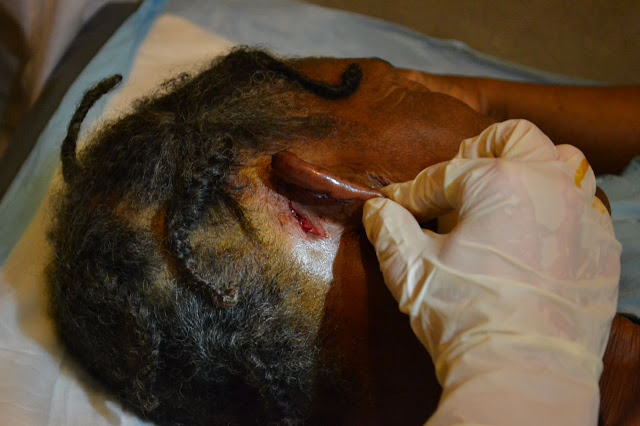 Here's the cut on her skull, behind the ear. 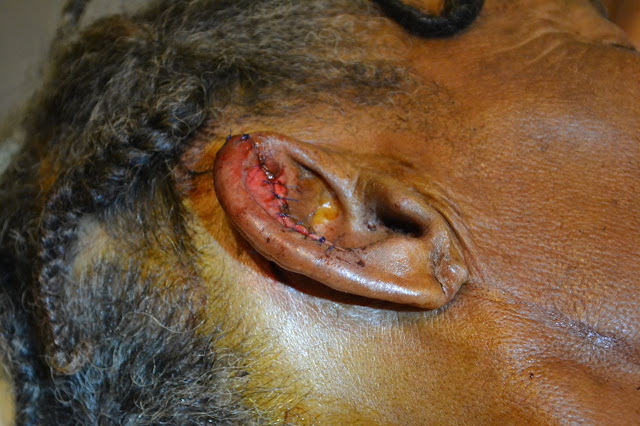 I was simply amazed when they were all finished;
who would have thought you could put an ear back on! 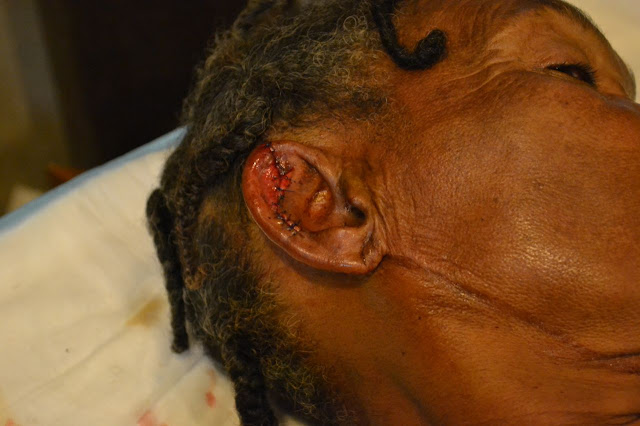 I wonder if this kind of ministry is very dear to the heart of God...
Since Jesus did some ear-healing in His time on the earth!! :) 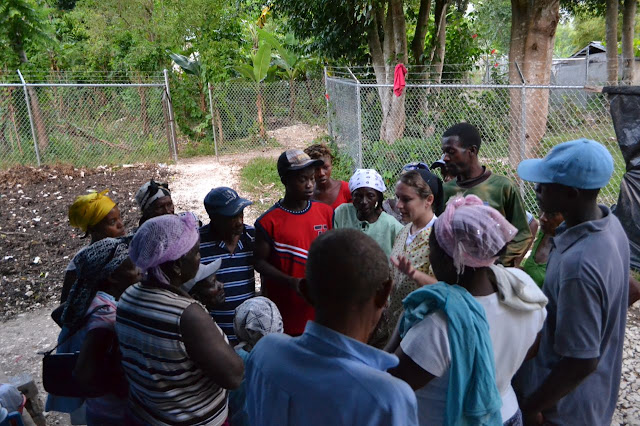 Anita explains the medications to the lady's caregivers as they gather around to listen.
The lady has come back several times since then and is healing up very well!!
By Unknown - July 31, 2012 No comments: