...albeit not a very fair one, as it involved six people against one hip.  One very stubbornly dislocated hip that took all we had to put back in its rightful place! 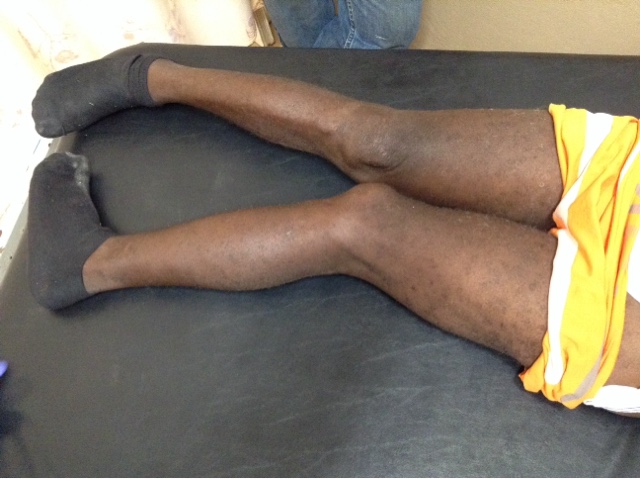 I'd seen this little old man carried in earlier in the morning to the clinic by a rather jolly looking younger fellow who placed him on the bench outside until his number was called.  I thought he must be really weak if he had to be carried in, but I didn't think he looked sick, so I let him wait and kept on working.  "Probably has diarrhea." I thought to myself.
But that wasn't the case.  By and by he got called in and one of the Haitian nurses consulting him soon called me into her room to help decide what to do with him.  They said a tree had fallen on him six days earlier, but they hadn't been able to find a way to get him to the clinic any sooner.
We knew that it'd be much harder to relocate a dislocation after so many days had passed, but we decided to give it our best shot!  The alternative would be a very painful ride out to town where they'd have to try the same thing or he'd likely never walk well or at all again.
We knew we'd need some muscles for this job!  Hans, Brandon, and David were called and soon showed up.  Alyssa, Kin, myself, and the guys all got into position and we started the wrestle.
I couldn't help but think of the account in Genesis of the angel that wrestled with Jacob and dislocated his hip with one touch.   And the louder our little man yelled in distress, the more earnestly I prayed for God to touch his hip and put it back in place...
We pulled his leg (but this was no-joke! :-0) a few times, the sweat streaming down our faces, and tears down the face of the poor man.   But nothing seemed to change, except the increased discomfort of the man.
Feeling a bit discouraged, we all took a break to re-decide what to do now.  Alyssa suggested trying just once more.  We all agreed, and found our positions again with renewed determination.
One, two, three... And again we all pushed and pulled, and again came the tears and entreaties to stop...   "Please, Lord, touch his hip!"  And...POP!   Most of us felt it.  Some of us even heard it.  But we all saw it was back in place!  Thank you Lord! 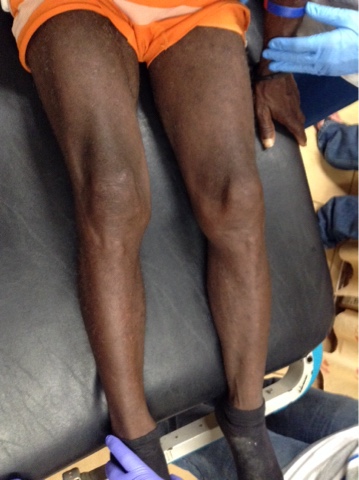 The man's cries changed immediately from pain to praise!  "It's unblocked, it's unblocked!"  He cried for joy, while we all did high fives!
We kept him bed rest on plenty of pain pills and then sent him home on his own two feet a couple days later!  I love watching people heal!  It's a beautiful thing God does over and over here, and it amazes me every time!  He is good!
-Mis Whit
By Whit - September 24, 2015 1 comment: