The Story of Tuesday

It's Saturday again!  Let me think back a few days to Tuesday...
We had a fairly normal clinic day, a lot lower-key of a day compared to Monday, but still enough to keep us running.   We figured we saw around 90 people Monday, 16 of them being pregnant ladies which was what kept me busy most the time!  Tuesday we saw around 75 people, a little more normal, but still quite a few!  :)

The day started out with a guy knocking on the gate around 8:30, informing us that a sick person had been brought into the clinic.   I was on call for the day, so I hurried down to the clinic with him to investigate.  I thought I understood him tell me it was a sick baby, but when I got down there I was surprised to find an elderly lady and I realized that he had told me that she was like a baby cause she couldn't talk.

Her blood pressure was 230/130, and she couldn't walk or talk.  She had classic stroke symptoms; one sided drooping of the mouth and one completely limp side of her body.   We addressed her blood pressure right away and monitored her vitals closely the rest of the day.    It got easier for her to talk as the day went on, and by the afternoon they wanted to take her home, but we kept her for the night and let them go the next day when her blood pressure was more controlled.

The rest of our day went well, and just as we were closing around 2:00, a young guy was brought in that had the fever and was dehydrated, so I put him on an IV.    He surprised me with how much English he spoke!  I had to wonder how much he might have overheard of the semi-personal conversation Rho and I had had earlier! :)

Just as I finished sending him home and taking the stroke patients' vitals again, Mali came running in and told me that there were two injured guys who had been building something like a rock/cement ceiling, and it fell in on them.   The one had just walked in with the help of a couple friends, and the other was down the trail a ways being carried in on a stretcher.

I was glad Marcile had just come down to the clinic too, and we called Rho right away too since there were two patients and we didn't know how serious they'd be.   Mali and Marcile took charge of the first guy, who had a wound on the back of his head and was pretty sore, but thankfully not hurt more seriously.

The second guy arrived shortly, along with a crowd of family, friends, and onlookers.   He came in lying on his belly, covered with a white sheet.  I didn't see any signs of bleeding, and he was fully responsive.  I was going to have them move him to the bed in the emergency room until I pulled back the sheet and saw his back!  I had a sinking feeling that he would never walk again.  His middle back looked distorted and was majorly swollen.  He couldn't feel a thing from his waist down.  We decided to put him, stretcher and all, on the bed.   We applied ice packs and gave him a pain pill right away, but that was all we could do.  Rho arrived and talked to him about the Lord, asking him if he was born again.  He said he was.  We were pretty concerned about the possibility of any internal bleeding putting him into shock, so we kept a close eye on his vitals.  We were relieved to see only stable vitals, but still quite worried for the guy. 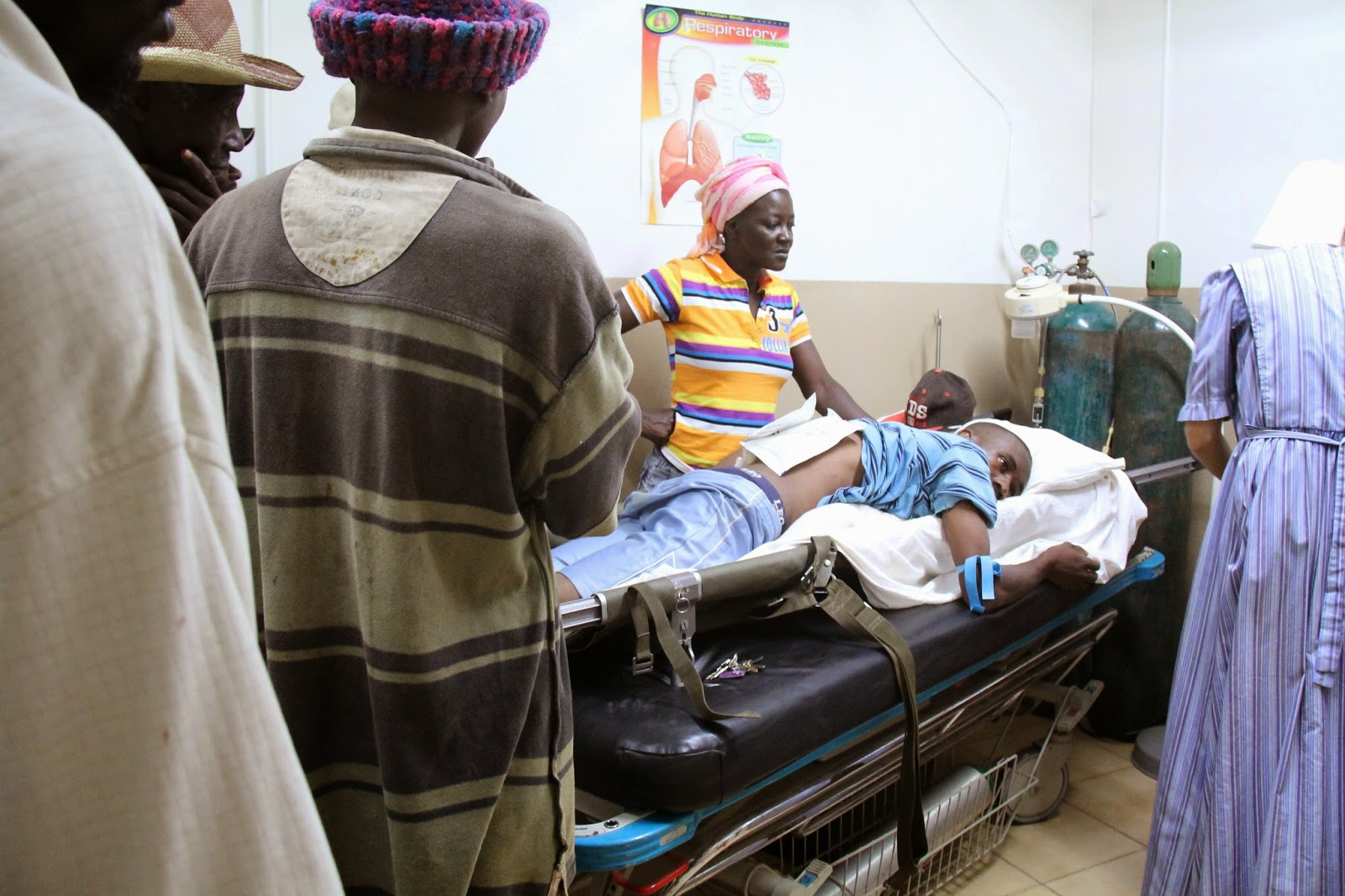 We started making plans to transport him to the Ti Guave hospital, but Donny was on his way back from Port (picking up a group from the airport) and Grandpa was the only guy around.  He had just gotten back from a long day in town himself, but he insisted on being a big blessing and driving the guy out for us!   Mali and Marcile kindly offered to stay and take care of the other patients, so Rho and I could go along.

It took us awhile to figure out how to transport him, since of course we wanted him to move as little as possible.  We got him strapped in on the back of the gator, and then Rho and I rode behind to help hold him.   The rugged trail made it impossible to keep him perfectly still, but thankfully he seemed relatively comfortable and hardly cried out at all. 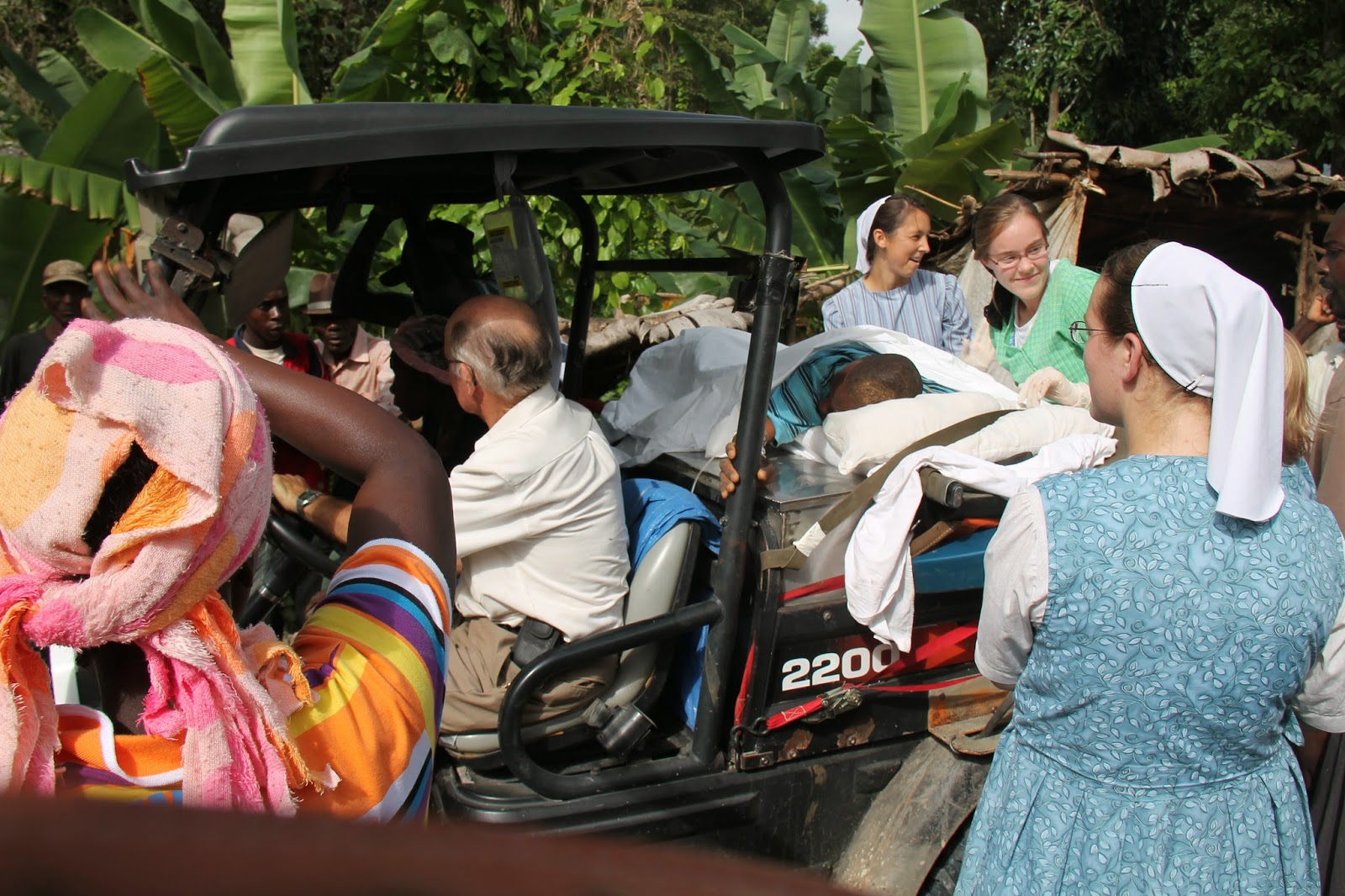 When we got to the hospital, we ran into another dilemma cause the hospital wouldn't accept him there, but long story short, they finally put him on an ambulance for us and sent him to a bigger hospital.  After that we met up with Donny and the crew (Julien and Janelle Hege, their cousin Joel, Darwin, Paul Lapp, and Hans Hertzler) and traveled together back home.

We've had a lot of good full days like that this week!  Yay for a lower-key Saturday!  :)   Rho just came in and said two laboring women showed up at the clinic, so that'll likely key up our afternoon a little!   We were just discussing yesterday how long it's been since we've had a birth, wondering when we're going to get one of those knocks in the middle of the night, so we're happy they're coming so early on a Saturday...:)
By Whit - September 13, 2014 No comments: