This morning I checked the calendar  to see who was on call. Realization struck that maybe I should consider blogging again.  All day I have been scratching my brain for an inspiration but, it has been slow in coming. We have had busy clinic days. I should have lots to write about but, it seems the days are starting to run together in my mind.


The thought I have been pondering the last few days is sharing God's love even when it seems inconvenient for us. Many times a day I am disrupted of a task at hand due to another patient or someone needing something. At times, it can feel discouraging. I begin to think I would be more efficient if I could complete a task without interruptions. I have my schedule and need to get x,y, and z done before the day is over. I want to help people BUT  it needs to work into my schedule or not?

The last few weeks have been filled with long clinic days. Most times whatever we had planned for the afternoon didn't happen. People we wanted to go visit had to wait until another day.Plans got changed complex situations arise at the most inconvenient times or so it seems? People need to be transferred out.( Side note the one day we had two air transfers, maybe someone else will update you on that.) It may mean a trip out to town after a long day with a labouring woman. Maybe it means being late for a birthday party because a patient needs help or leaving the birthday party early because a patient has come to the clinic in need of help.

It may be the small things that are almost unseen and yet disrupt my plans. It may be an IV catheter has come out and we have to restart it. The patient is hard to stick and we are tired. A knock on the gate just when we are ready for supper. We have to wait until the needs of that person are met so we can eat. It may be someone who needs something and it is pouring rain. Why did they come to the gate while it is raining? Could they have not waited until after it stopped?
My schedule during clinic hours may be disrupted. I am trying to complete a task but, someone else needs help. These people need to be controlled. A lost dossier needs to be found. The pharmacy needs milk from the depot. A box of protein is needed from the house. An IV needs to be changed and the day keeps going. At times I ask myself what have I done today?

The more I ponder this question the more I realize it isn't about what is convenient for me it is about meeting the needs of others. I can have all these excuses that make sense in my mind why it is inconvenient. However, does God look at my pleas/needs as inconvenient? I hope not. How much more I want to be willing to show Christ to these people even though it may be out of my schedule or interrupt my task at hand.

A few recent pics from clinic... 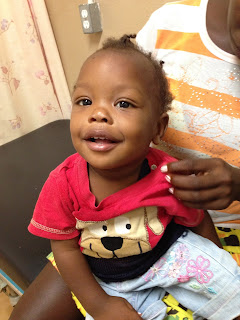 A little boy on the malnutrition program 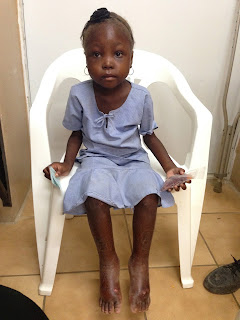 A little girl with Kwashiokor 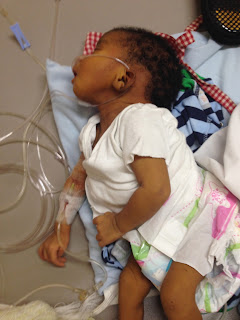 A 7 day old baby with meningitis

Thanks for your continued prayers and support!
~ Alyssa

Sunday morning.  A time to sleep in a bit, drink coffee, leisure in the knowledge that today is a day for rest...spend a little extra time reading your bible and praying, eat a good breakfast - maybe just spend a little time on the swing reveling in the beauty of the morning.

That's what I think a Sunday morning OUGHT to look like.  My morning didn't exactly go as I had planned it out in my head this morning.

I woke up around seven thirty to a knock on the gate.  When I saw what time it was, I assumed it was the boys bringing the soup that Pastor's mother-in-law sends for him (and us) every Sunday.  I closed my eyes and willed someone else to please answer it so I wouldn't have to wake the child sleeping next to me up.  Thankfully Janell did just that, and quiet reigned for all of two minutes.  Then Judnay decided to wake up and declare his hunger for eggs, so the two of us tottered out to the kitchen to round up some coffee and food.

This is where Janell found us when she returned from the gate a few minutes later, with news of a lady in labor who was being brought in on a cot.  I turned the egg-making over to her capable care, and headed down to clinic.

On the way down, a friend of mine asked if it was possible that we could give his sister a ride home from the clinic that morning, to which I replied I would ask Hans about it.  Upon my arrival, I found not one, not two - but THREE woi-ing women.  The one who had just arrived was still on her cot outside the door, since our beds inside were full.  I called her in to see how far she was progressed, while I grabbed a radio to talk to Hans.  It was her first baby, and she'd only been in labor since the night before, so it wasn't surprising to me to find that she was barely dilated.  I sent her out to walk around outside, while I went to tell the family of the stroke patient occupying one of our beds (my friend's sister) that Hans had agreed to take her.

Preparing her and her meds to leave took up the next little bit, and Hans arrived shortly after to transport her on the Husky.  I waved goodbye to them, as I called the next laboring woman in to check her.

She had been here since the night before, but hadn't been very far along then.  I found her much closer when I checked her now, and made a mental note to keep a close eye on her, while I went to check on the next woi-ing lady.

She was actually only seven months along, but had come in for diarrhea that was threatening to send her into premature labour.

One of our resident bandage patients, St. Luke, showed up at some point in here, ready for his daily bandage change.  And it was also at some point in here that Hans called on the radio to alert me to a young guy he had passed on the trail that was "kinda bloody looking with something wrapped around his head."

I called Alyssa to ask her if she would mind coming down to bandage St. Luke, and she showed up shortly to help out.  She had no sooner than walked in it seemed, when I heard voices outside.  I figured it was the boy that Hans was talking about, so I headed out to see how bad it was.  He was out there, sitting with something (I think it was a shirt) wrapped around his head.  However, he wasn't the only bloody person out there.  Another young boy from the area here had slipped when feeding his animals that morning, and sliced his ankle.  I gave the one that didn't look as bad some gauze to cover the cut, while I called the one with the head wound in to check it out.

Upon inspection, I decided it definitely warranted stitching, and since Alyssa finished her first bandage job about now, she offered to do it while I went to start an IV on the lady threatening to miscarry.

On the way there, I radioed Whit to ask her if she wouldn't mind popping in for a bit too, to which she replied that she'd be there in a minute.  I started the IV on my lady, while she went to start one on the lady that was close to having a baby.  I finished mine, and gave her a round of meds that was supposed to be followed by a second round fifteen minutes later.  By this time, I felt like I should probably be in the room with my other laboring woman, so I asked Alyssa, who was finishing up her stitch job, if she could give her her meds when my timer went off, since I figured I'd still be in coaching this lady.

It had just a hair over twelve minutes left.

Whit was finishing up this IV when I came in to check her again, and I found her ready to have her baby.  I explained this to the woman, but she told me that she felt like she was too tired.  I encouraged her to try, since I felt like if she would just give a few good pushes she could just have this baby, and, with her next contraction, she did just that.  And, to the surprise of everyone - including us two nurses - she really DID just have her baby right then.

A little boy - a fact that his father couldn't stop grinning about.  They had a girl already, and had been wishing for a little boy.  We were cleaning up afterward when I heard my timer going off in the other room.  My head whipped around in surprise, as my eyes met Alyssa's equally surprised ones.  Funny, sometimes, how much can happen in such a short time.

Well, this is a post that I started Sunday evening and fell asleep before I finished.  A lot more has happened since - David left on Monday, along with Judnay, who they dropped off at his new home at IFM.  We sent the girl threatening to miscarry out to Petit Goave with them as well, and last I heard, they were considering giving her something to "make her have the baby".  Whit, Alyssa, and Hans also made a run out to town with the other girl that had come in Sunday morning, where they did an emergency cessarian.

We've been busy the last couple weeks.  Fre Adolph told me the other day that the reason we've been having so many people at clinic is because people are getting done with their bean harvest, and they now have a little time and money, so they're all coming to the clinic now.  That, coupled with the fact that we're short one nurse since Mali is back in Canada spending two weeks with her family right now, has kept us hopping.

As always, please remember to keep us and the people here in your prayers.  I can't tell you how much they really do mean to us.

Oh, and for anyone who was paying enough attention to realize that I forgot to tell you what happened with the poor fellow I had left sitting outside with a gauze on his foot - Hans bandaged it when he got back from taking the stroke patient home.  So no worries, he's not still sitting down there waiting for me to come. :o)