Babies--the sweet and the bitter

As 3 of us nurses were on our way to church Sunday morning, we get the news that a lady in labor was in route to the clinic.  Seeing it wasn't my day on call, and I was eager to get to church for once, I continued on my way.  Breanna was on call so she stayed to check the lady out.  It turned out to be a first time mom in the beginning stages of labor.  We monitored her throughout the day, and by night decided that she was far enough along that we should bunk out at the clinic for the night.  (Now that we have a room where the nurses can stay, it avoids so many trips back and forth at night.)

Progress was slow through the night, and Breanna and I passed a fitful night.  By about 6 in the morning, things were finally progressing, and a baby boy was born at 6:44 Monday morning. We were again blessed to clean up and dress a healthy baby. 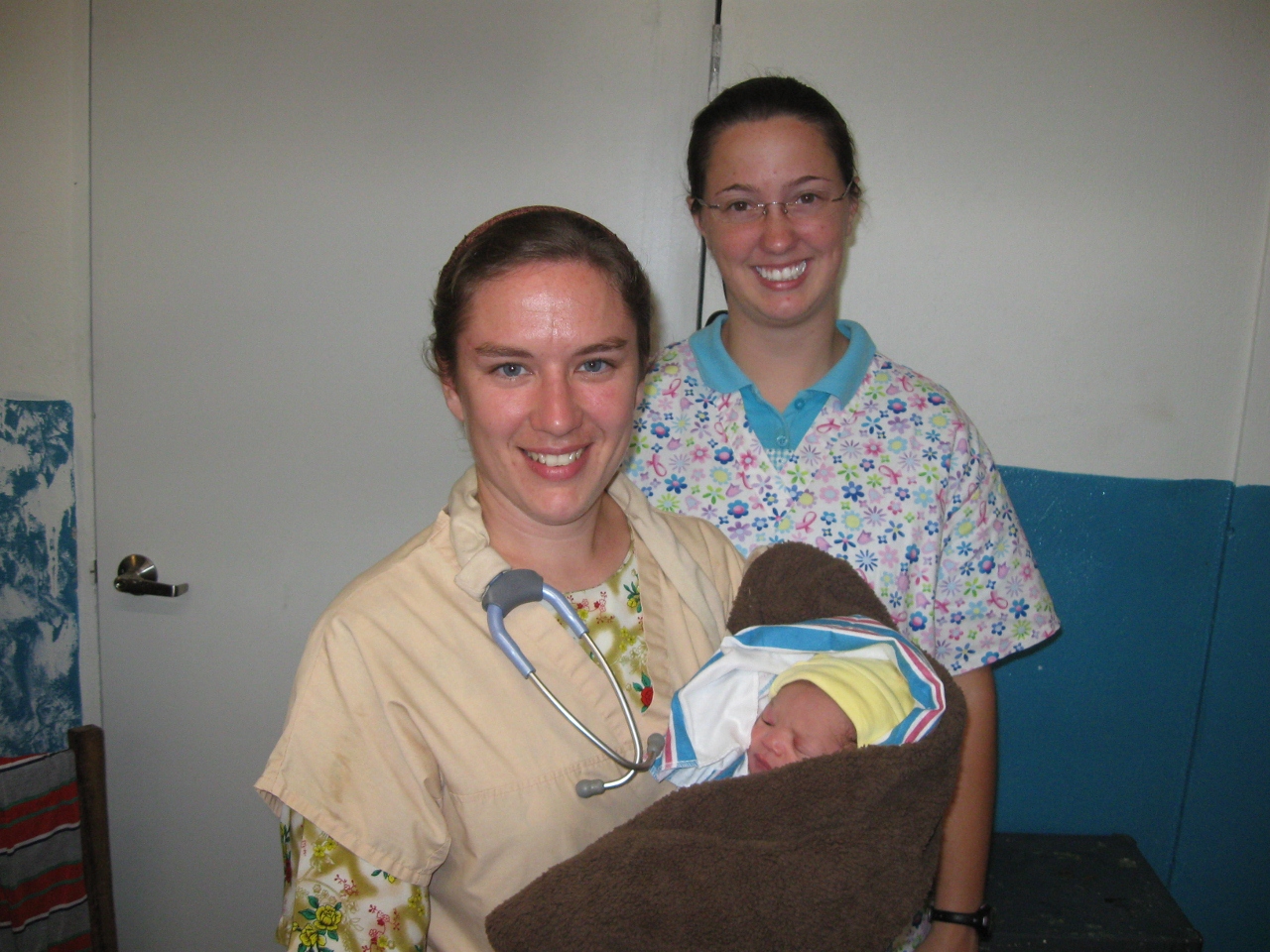 Breanna and I with the baby 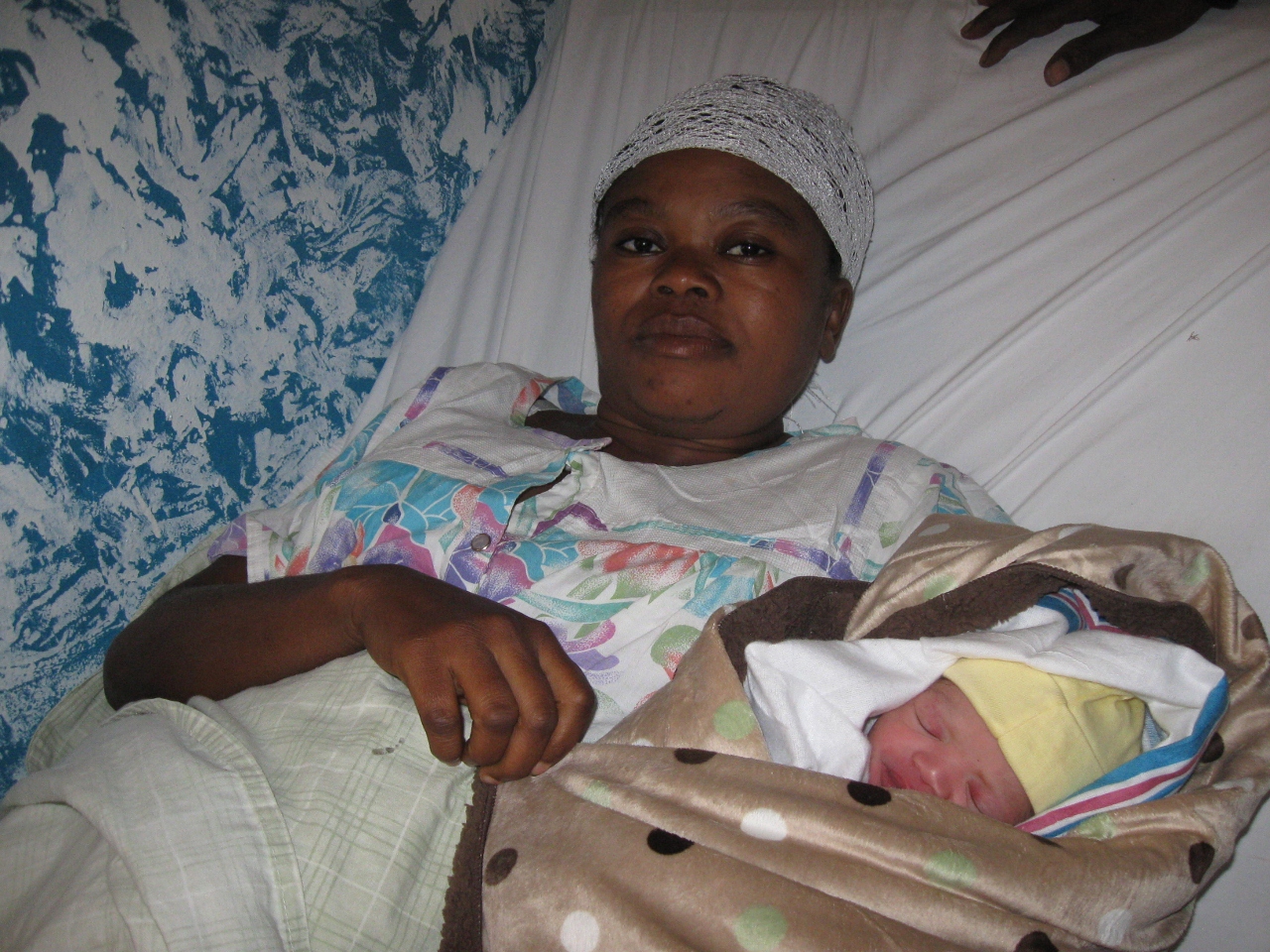 Now to the bitter side of baby stories. . .

Tuesday (yesterday) brought us a number of sad baby cases.  The one was a baby who had been here before.  I had give them some supplements and told the mother to return.  She returned about a month after the appointment I gave her.  Her baby, now 3 months old, weighs 5 lbs, which is less than weighed at 2 months.

It was pitiful to see it's malnourished body and hear it weak cries.  We again gave it some supplemental milk and told the mother to return in a week.  I can only hope and pray that the mother gives it aggressive care and returns when she is supposed to. 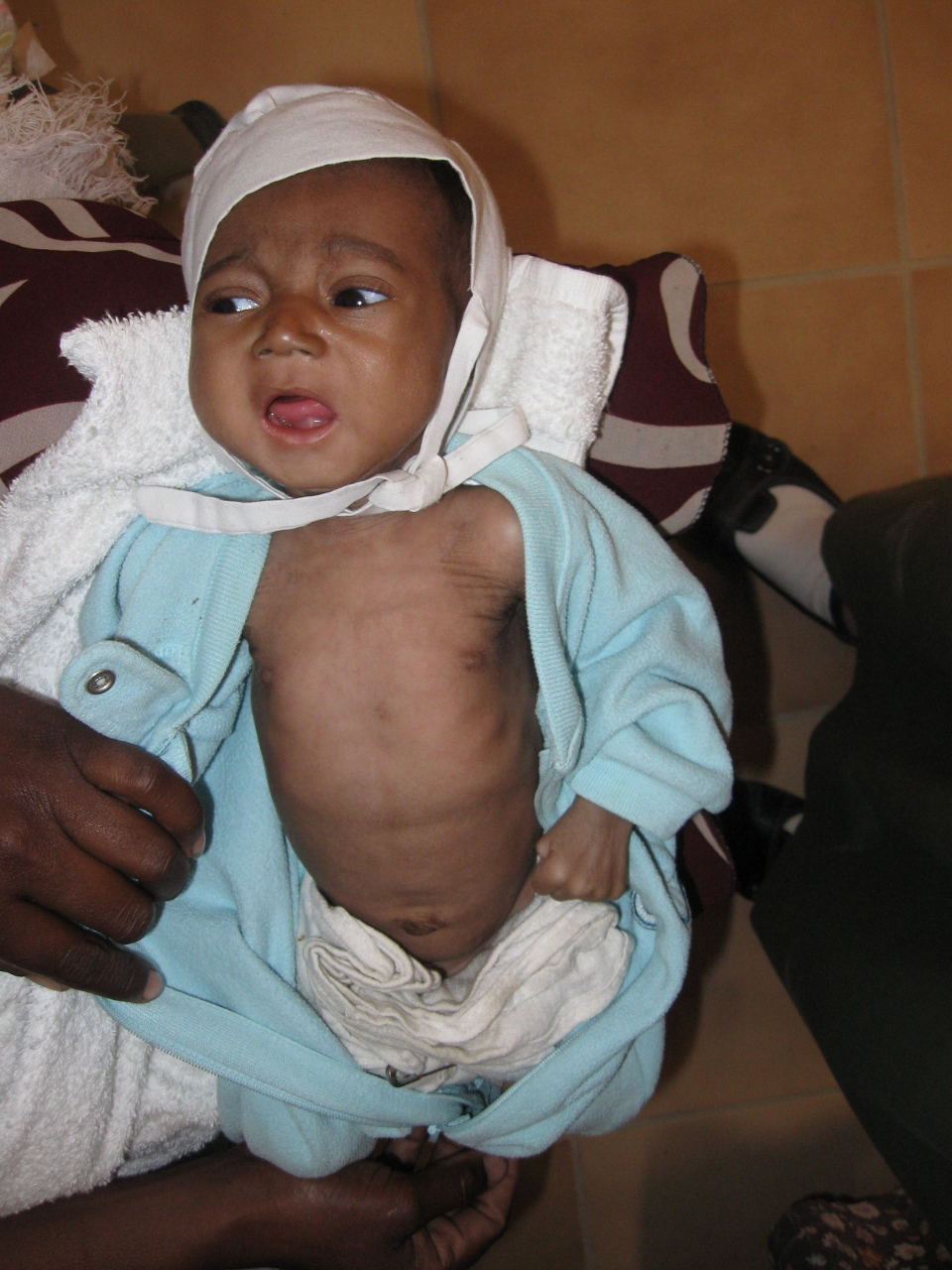 At about the same time as I was dealing with the malnourished baby noted above, a case of tiny twins was brought to my attention.  Breanna had their parents come into my room with them.  Upon first glance, you just saw these cute, tiny baby which were a week old.  With further investigation it was obvious that they were in bad shape.  They appeared premature, but the mother didn't know her dates so we don't know how near full term they were.  I had the mother try nursing them, and neither of them was even interested in trying to nurse.  They told us that the babies had quit nursing the day before.  (We later found out that it had been 2 days before.)  The more we checked them out, the more we realized how very low these babies were.  The little girl, Ranette, was in more serious condition.  Gin quickly got an IV in her, and the dextrose perked her up a bit.  (By the way, putting an IV in any baby is challenging with its tiny veins, but a preemie?  Gin did a great job!  She said, "God put it in.")  In a little bit her color was looking bad again, and we began assisting her respirations.  We soon saw that we were losing her. 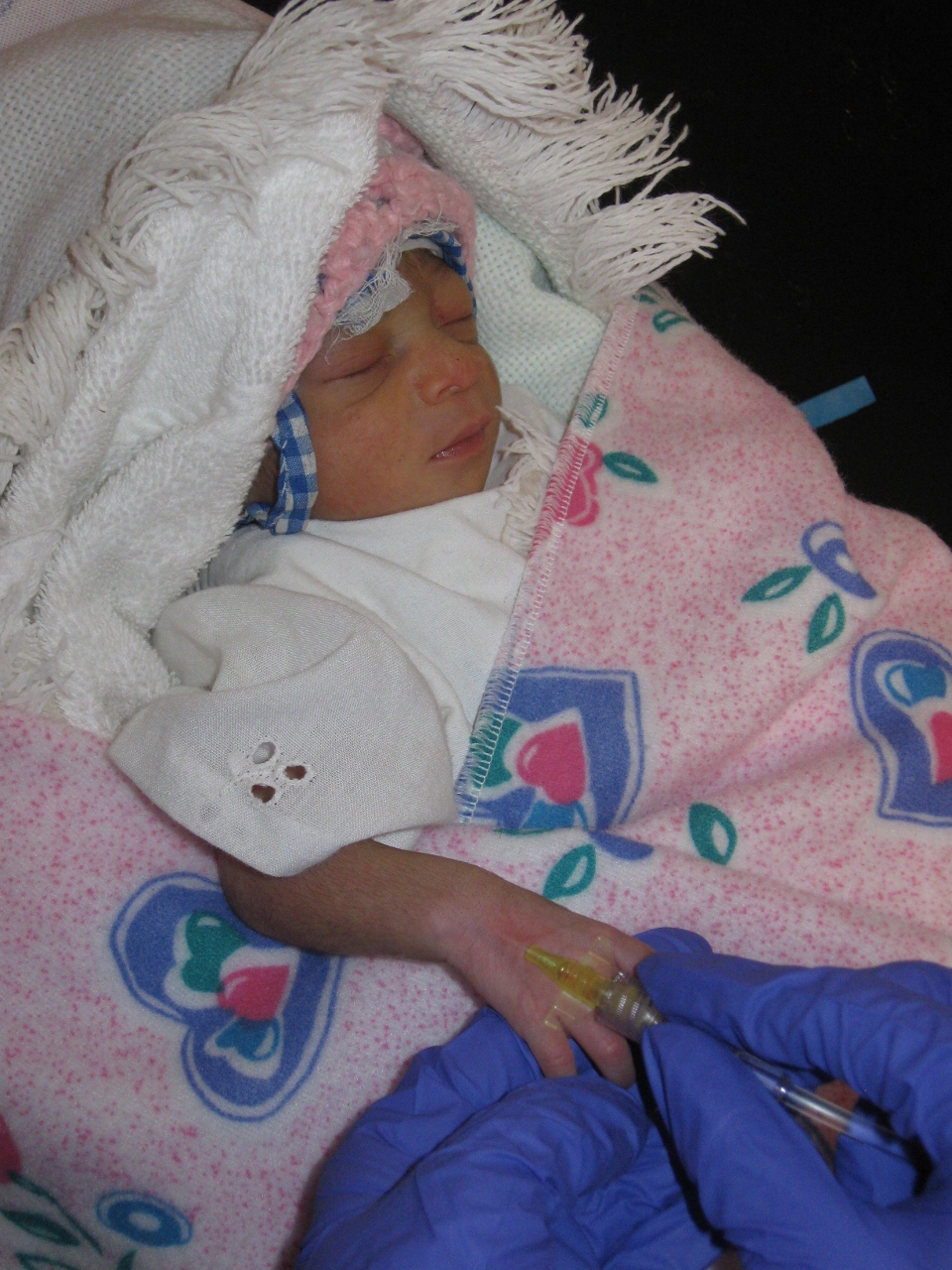 A close up of Ranette with the "huge" IV in her "tiny" hand.
(Note the size of Gin's fingers compared to the baby's hand.) 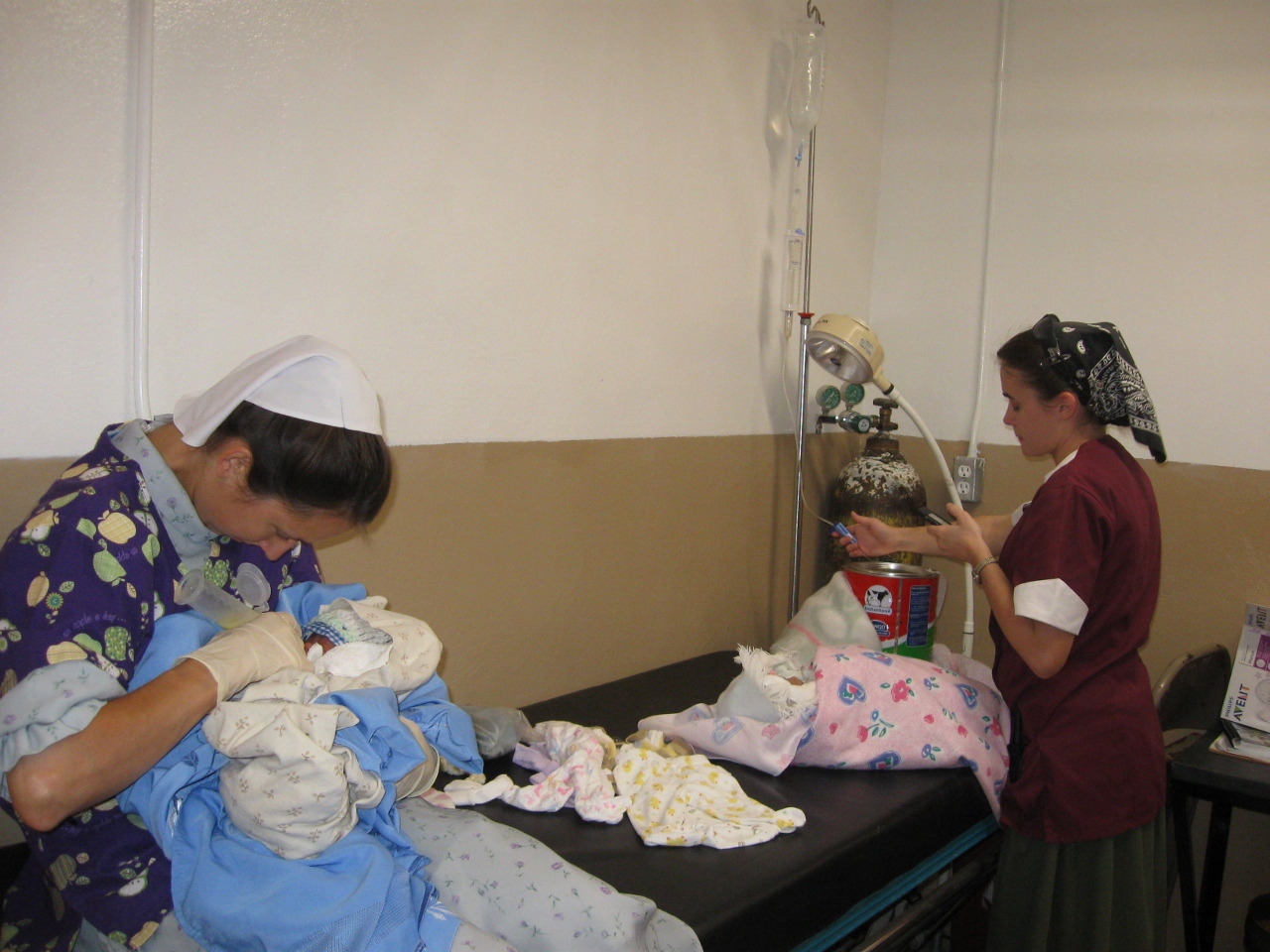 Rhoda tediously feeding Raymond, and Gin adjusting Ranette's IV
(Raymond, the boy, weighed under 3 lbs 1 oz. still with his hat and undershirt on.  We never got an exact weight on Ranette.)

When Ranette died, her brother, in contrast was doing well.  He was taking little swallows at times, and drip by drip Rhoda and Heidi got some nourishment into him.  His body temperature was low so they heated him up with a heat pack and then a hot water bag.  They stayed with him and his mom all afternoon and managed to get an ounce or so into him.  By supper time, they came home and let him have a break.  His parents seemed fine with watching him a while.  After supper, upon checking on him, he seemed to be doing a little better.  We went down again just before bed to see how he was doing.  As we walked into the room, the parents calmly told us that he had died.  We were shocked as it seemed he was doing a little better.  Although we knew his chance of surviving was low too, we had held onto at least a thread of hope.

Before coming home, we spent a little time just talking to the parents.  I think they were touched to see how much we cared for their tiny babies.  The father said, "It's not your fault."  As we left them, the father said, "Remember me in your prayers."  I ask you all to remember them too.  They are Christians, and like most Haitians have faced a lot of hardships in life already.

The case below doesn't fit the title, but I'm sticking it in anyway.

Do you remember the really grossly infected foot we blogged about a month or so ago?  Well, this is the same girl.  We transferred her to T-Goave, and figured she'd probably lose her whole foot. They did an excellent job of amputating her 2nd toe and bring her foot back together.  She is now coming here for bandaging several times a week as it continues to heal. 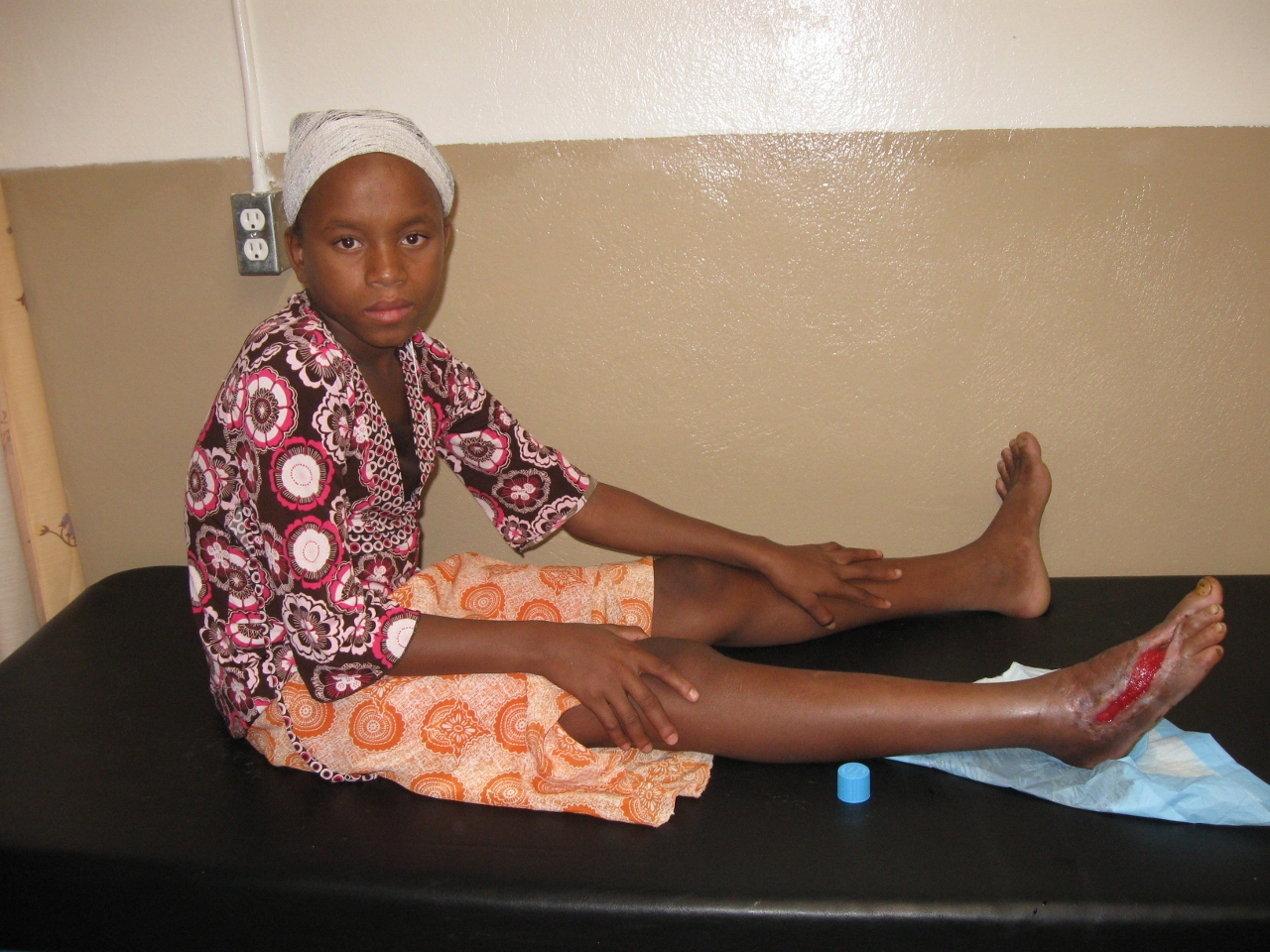 Here she is.
She looks pretty sober here, but often has a bright smile on her face. 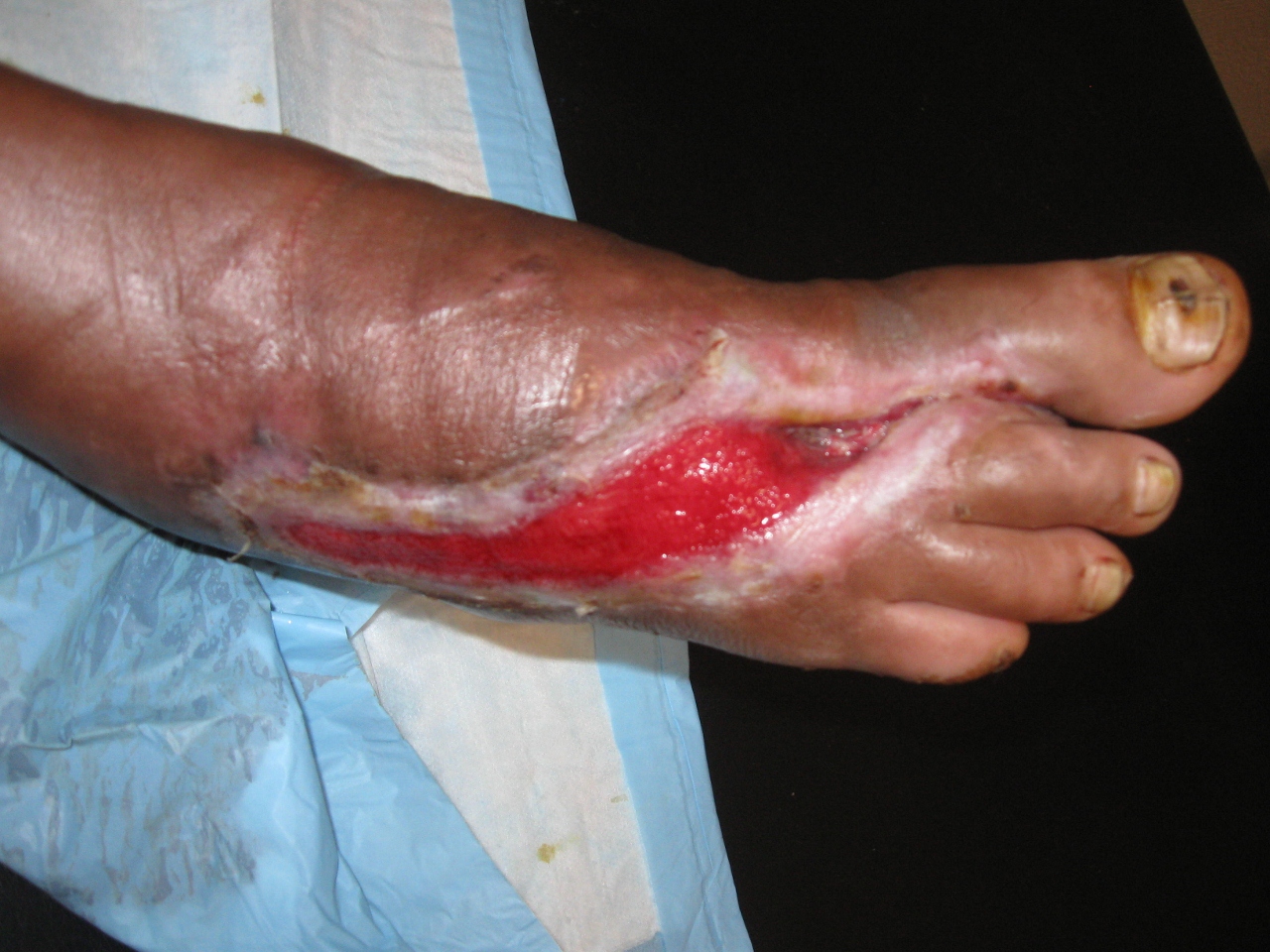 A close up of the foot