After our previous birth cases Sat and Sun, we had yet a third lady come in labor Sun around noon. This lady was expecting her third child. She was carried in from out toward Fort Gary--5 hours hike or so away. When she arrived things looked fine, but she was at a stand still. We waited all afternoon for labor to pick up again, but it didn't. Since it had been so long since labor had started and her water had broke, we decided we should augment labor with oxytocin. We started it slowly, monitoring to make sure it wasn't causing the baby stress. Toward the end, heart tones seemed low so we put the mother on oxygen, but baby was soon born and didn't take long to breath well and cry! And cry he did! It was a strong little boy weighing 6 lbs 11 oz. 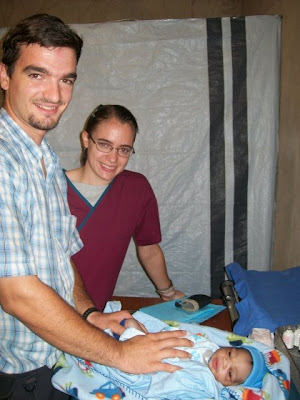 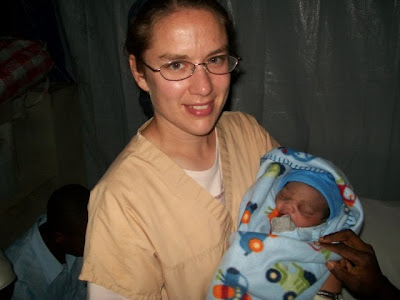 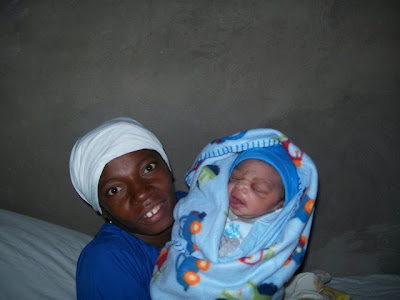 Email ThisBlogThis!Share to TwitterShare to FacebookShare to Pinterest
Labels: Births

More babies over the weekend, plus the man with malaria

Over the weekend there were several expecting mothers that came in. One of them had the baby before she could make it here, so they had to grab a stretcher and carry her from the trail. Once she arrived, the baby began to have seizures because of extreme low blood sugar. Apparently it wasn't born with a "reserve" of glucose in it's system and therefore had to be fed a special solution immediately. Once it had some in it's system, it did very well. Baby and mother were both sent home safely on Monday.

The other woman had to be picked up on the trail also, but thankfully we got to her before the baby arrived! Once we could get her into the clinic to examine here, the nurses realized that there were some serious complications. So we sent her out to the Ti Guave hospital, where they have all the necessary equipment for situations like that. We haven't heard how she turned out yet...

Also yesterday, a man came in, borne on a stretcher, unable to walk. He had a fever and back pains. It was determined he had malaria, in addition to an inner infection. He was treated and sent home to recover. 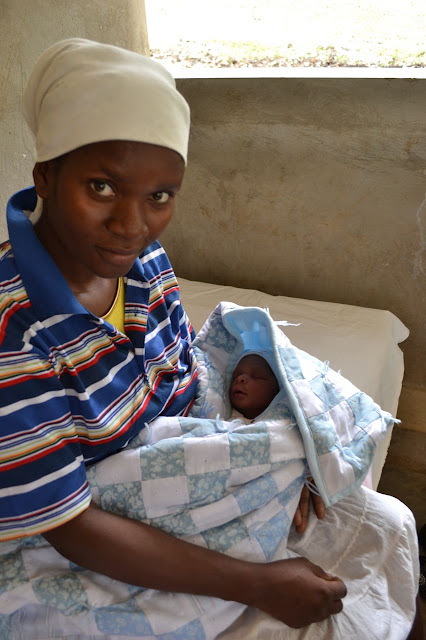 This is the first mom with her baby boy :) 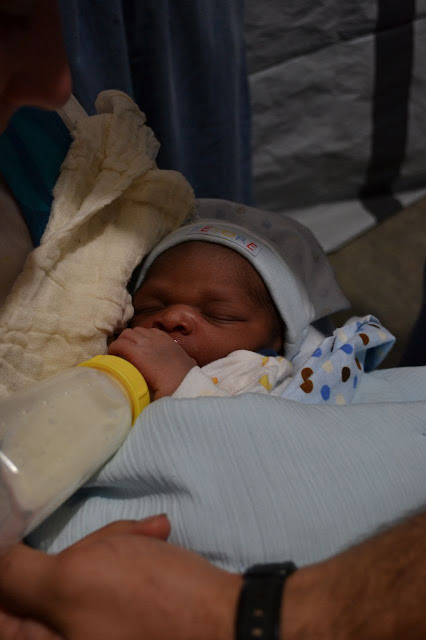 The little guy's blood sugar levels were extremely low,
so we gave him some special formula in addition to his mother's milk.
See how he's holding his bottle? Pretty cute little guy... 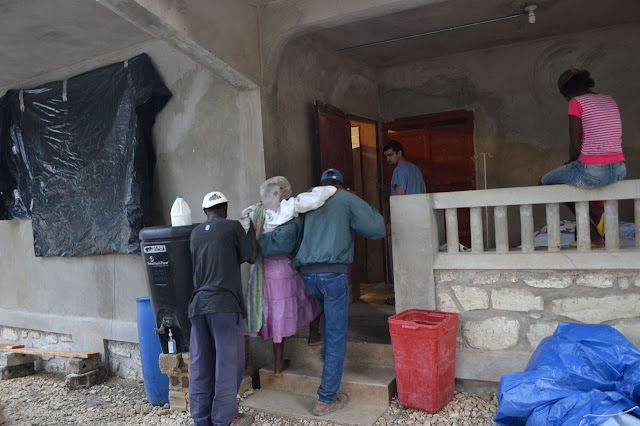 The second woman that came was brought by one of the machines. 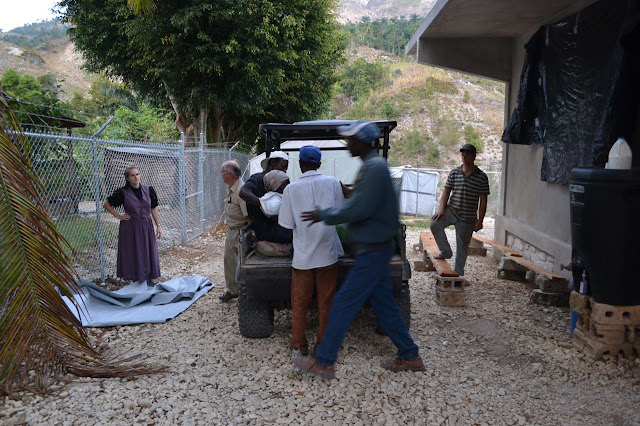 Because of some serious complications
we had to take her to Ti Guave on Sunday. 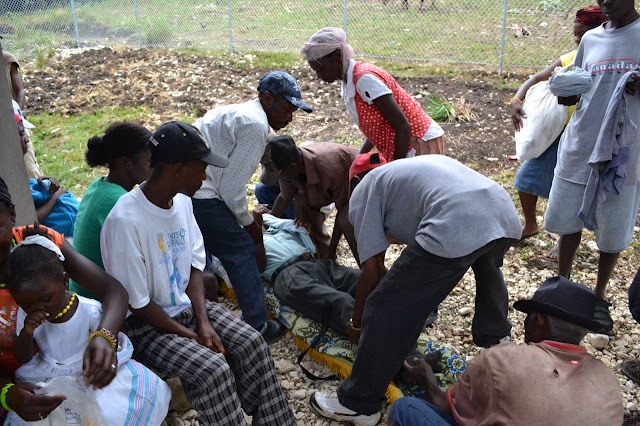 The man that came in on the stretcher...
He was very sick with malaria. 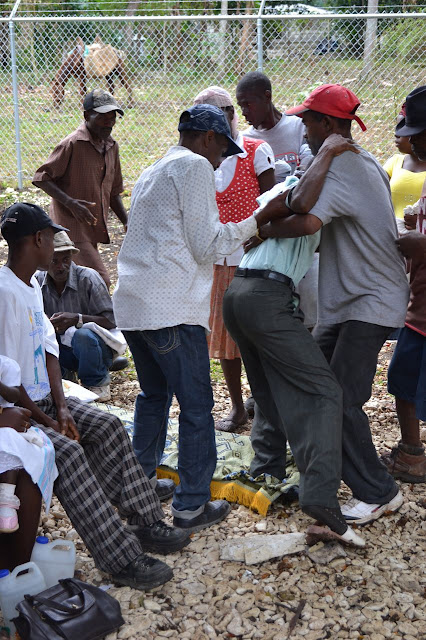 A whole crowd of people accompanied him;
Some were friends, some helped carry him, but many just came along to watch. 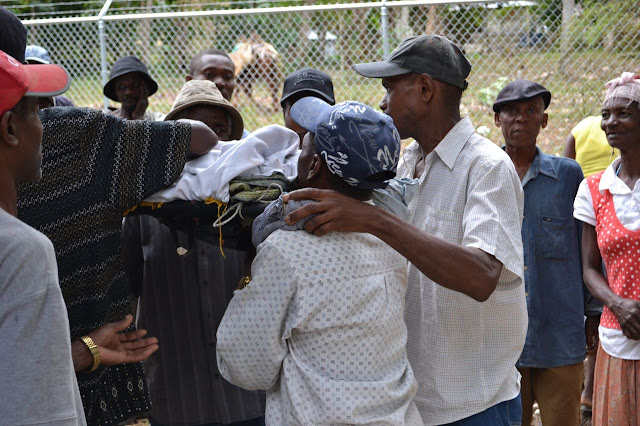 After he was treated, they hefted him up on their shoulders once more,
and carried him home. 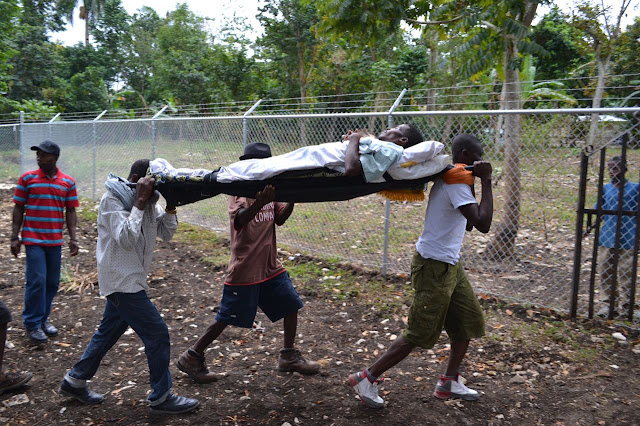 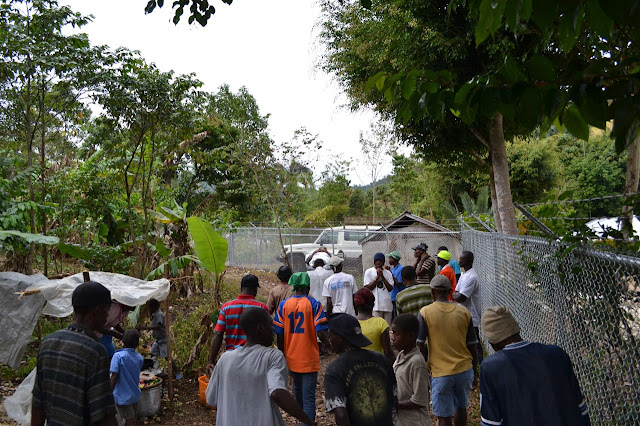